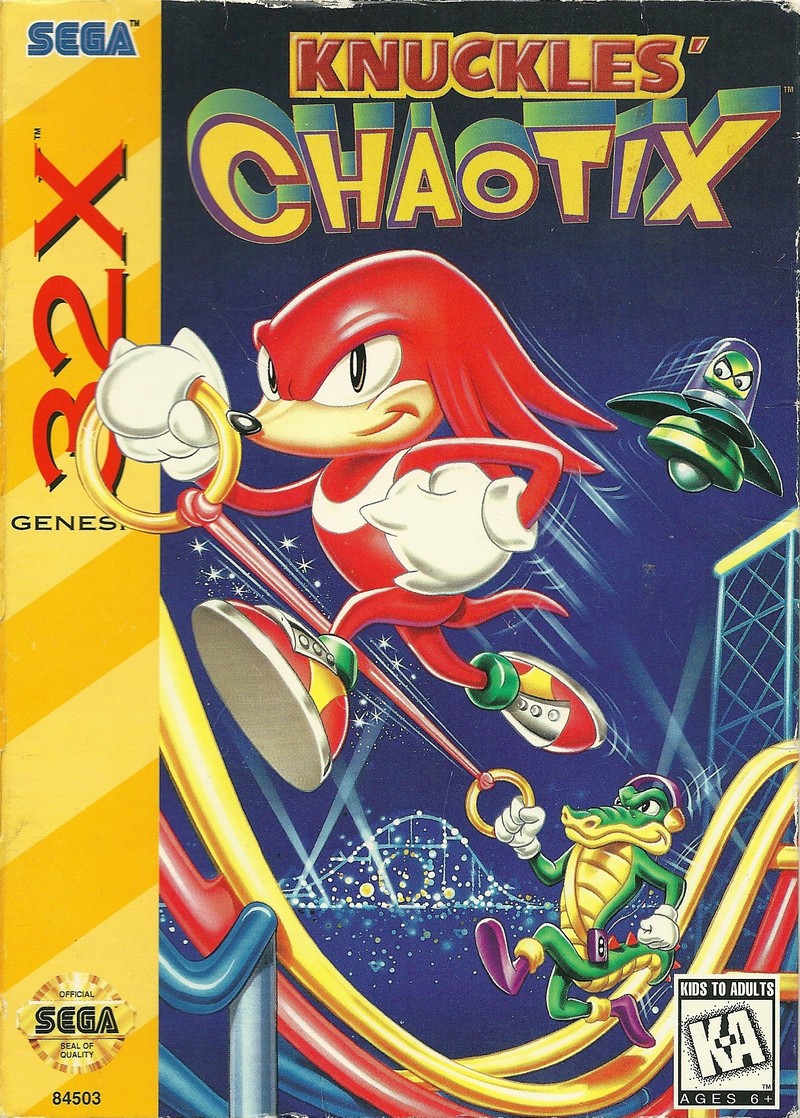 Knuckles' Chaotix (Chaotix in Japan) is a platform game in the Sonic the Hedgehog series series, developed by Sonic Team and published by Sega for the Sega 32X. The game was released in North America in March 1995, in Japan on April 21, 1995 and finally in Europe during May 1995. Despite demand from fans, the game's only re-release has been via GameTap. It is the only Sonic-related game to be released for the Sega 32X and its stand-out features include its 2D sprite-based graphics and simultaneous two-player gameplay.

Tomorrow's the big opening day for Carnival Island, a huge amusement resort with the latest in high-tech rides and games. As guardian of the island, it's Knuckles' job to make sure nothing goes wrong before the grand event.

Unfortunately, the evil Dr. Robotnik has other plans. He needs fuel for his latest diabolical device, and the Power Emerald that supplies electricity to the entire island fits the bill perfectly. His awful new invention, the Combi Confiner, should help him get rid of that annoying Echidna and his friends. When Knuckles returns from patrolling the far end of the island, he discovers that Dr. Robotnik has imprisoned all of his friends- Espio the Chameleon, Mighty the Armadillo, Vector the Crocodile and Charmy Bee. After he chases the Doctor off, Knuckles discovers that he can rescue one friend at a time by using Ring Power... only the power that sparks between the rings holds the two partners together like a magical rubber band. Never held back for long, Knuckles finds that with a little teamwork, he can use the stretching and snapping action of the Ring Power to double- even triple- the partners' speed.

And they need all the speed they can get. As Dr. Robotnik drains the power from Carnival Island, everything on the island begins to break down! Robotnik must be stopped, or by tomorrow morning - the morning of Carnival Island's big opening day - the grand amusement park will lie in ruins!

The story was revised in the Japanese manual. In it, a mysterious island rose from the sea shortly after the events of Sonic & Knuckles. Dr. Eggman discovered the island, and found a mysterious ring inscribed with descriptions of the Chaos Rings, ancient Rings infused with Chaos Emerald energy. In order to find these Rings, Eggman built his base, the Newtrogic High Zone, on the island. Mighty the Armadillo, Espio the Chameleon, Vector the Crocodile, and Charmy Bee also arrived at the island, and ended up being captured by Eggman and Metal Sonic, and placed in Eggman's "Combi-Confiner" machine. Knuckles, curious about the strange island, goes there as well, and manages to rescue Espio. The two then go on to stop Eggman from getting the Chaos Rings.