Like most Sonic games, there are a few interesting cheats that change the way the game plays. Unlike others, however, these are accessed via a color test mode, instead of the sound test or a button combination.

From the start screen, go to the Options menu, and then the Color Test. On the left side of the screen, change the values to <06><0B><11> and <04><00><04>, from top to bottom. Now, press start, and a fourth option, Stage Select, will appear on the start screen. There will be several options:

Place - this is the level. There are several options:

Level - a number, 1-6. This determines which Act of Each zone is accessed. There are 6 slots because of the number of Chaos Rings there are, but 6 isn't available for ordinary zones.
At-Time - This determines the time of day the level is played at. options are Morning, Day, Sunset, and Night.
Player - This is the Player's main character. options are:

Combi - The secondary character. Has the same options as Player. An interesting use for this is that it allows for the same character to be used in both slots, so one can play as two Espio or two Knuckles.
Players - Not to be confused with the above entry, this determines if the game is being played by one player or two.

To access Debug Mode, press Start while in a level. The player team can now move freely around the level, much as in Sonic Crackers. It also displays a X/Y counter to show the position of the characters. 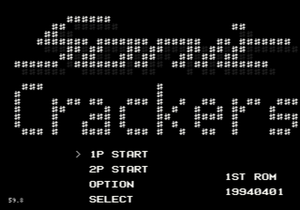 Sonic Crackers is a very interesting game. It only exists as a ROM; the most common explanation for it is that it was a tech demo for techniques that would be used in Knuckles' Chaotix. It has a black and white ASCII art title. The levels look very similar to those seen in Knuckles' Chaotix; one even looking almost the same as Techno Tower. Sonic and Tails are tied together by the Combi Rings. The levels go through day and night changes, like those in Knuckles' Chaotix. The debug mode is always active in this version. In between the levels are fields, labeled as "Special Stages". There are only two levels playable, with different palettes. All other levels are lost immediately upon starting them.

Though Sonic and Tails are missing from the final version of Knuckles' Chaotix, some believe that evidence still exists that they were once a part of the game, as shown in Sonic Crackers. A short summary of some of the evidence includes: