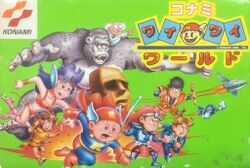 Konami Wai Wai World (コナミ ワイワイワールド) is an action game developed and published by Konami for the Famicom. "Wai Wai" is a Japanese onomatopoeia for a noisy, crowded area. The game stars various Konami created characters as well as Mikey (from The Goonies) and King Kong, who appeared in two Konami-produced, movie-based games.

The player starts the game with Konami Man and Konami Girl. They must visit six different selectable levels that take place in different Konami games, locate a key, and rescue the game's star character. Once a character has been rescued they are available to be switched to throughout the game. Each character has different abilities to begin with as well as a weapon they can collect. The player ventures through these first six levels in any order (similar to Mega Man). After these stages are completed, the player plays through a scrolling space shooter stage and then a linear final stage.

The player will also regularly visit the lab of Dr. Cinnamon (from the Twinbee series), who will give the player the game's character profiles and refill energy when needed. Through his lab, the player can also talk to Dr. Spice, Dr. Cinnamon's brother, who can resurrect any defeated characters at the cost of 100 bullets per character during the game. The game was never released outside of Japan, however the game has been fan translated, not once but twice. Neither translation is 100% complete, but you can find the translation patches here and here.

A mobile phone version of the game was released by Konami in 2006. However, that version replaces Mikey and King Kong with Upa (from Bio Miracle Bokutte Upa) and a giant Penta (protagonist from Antarctic Adventure, father of Pentarou), with their respective stages being a Candy stage and an Antarctic stage. These two characters from the original Famicom version had been omitted due to licensing issues.