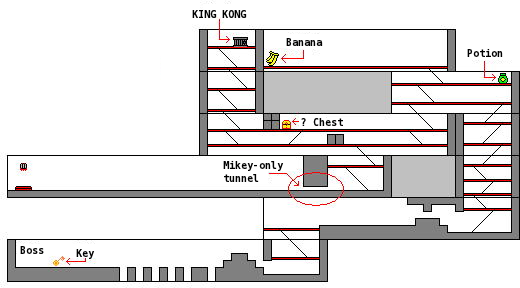 Only one character can fit[edit]

When you arrive in The Big City, you will be greeted by a seemingly never-ending wave of Floaters. They will fly down behind you and rush at you from the left. It's a good idea to be prepared to turn around and fight them before they hit you and cause too much damage to one character. However, after you progress to the right for some time, you will reach a very small tunnel. You will find that most of your characters cannot access the tunnel. The only one who can is diminutive Mikey. Unless you rescued Mikey from the Goon Docks, you will find it impossible to investigate the rest of this stage. Mikey is also needed once more on the way to the boss.

Once you're inside the walls of the city and climb up the stairs to the next level, you will be in the passage that contains Hoppers and Electrocuters. There's nothing you can do about the Electrocuters until you climb to the highest platform. Once you are there, you will find that the Electrocuters float quite a bit off the floor. There are three characters who can easily attack these machines without jumping, but you probably only have one by the time you visit this stage: Goemon. Use Goemon's high tobacco pipe attack to make short work of the Electrocuters without the need to jump up and down in order to strike them. Knock them out and then proceed to the right to explore more of the stage. After you obtain the key, you'll need to return to this location, and explore far to the left.

Battle the boss for the key[edit]

The Giant Mecha Ape guarding the key is one of the most difficult bosses in the game. While he doesn't do much to attack you directly, he sends a steady and constant stream of heat-seeking missiles at you, which you will encounter long before you actually reach the boss. This giant robot has a lot of health, and without a weapon that can inflict a lot of damage to it, this will be a long battle. Fortunately, you should have just the man (and his special weapon) for the job. Simon Belmont's special weapon is the cross-shaped boomerang. When you throw it, it flies forward for a little while, slowing down along the way and eventually returning to the place where it was thrown from. While it stops and turns around, it's capable of damaging the Mecha Ape the entire time the two are touching. Although it costs five bullets per shot, a few well timed and well thrown boomerangs can take the Mecha Ape down relatively quickly. If you managed to rescue Simon, but couldn't find his special weapon, search for a hidden staircase in Castle Dracula.

Rescue Kong and find the bananas[edit]

Once you obtain the key from the boss, the hardest part of your journey through this stage is complete. In order to rescue Kong, you must return to the hallway with the Electrocuters and walk all the way over to the left side. Kong is a tremendous asset to your team; his punches do tremendous damage compared to anyone else on your team, and he can jump much higher too. After saving Kong, you should make sure that you find his special weapon, the bananas, before you leave. They are found at the very top of the stage, and enable Kong to throw boulders at his enemies. There does not appear to be an easy warp out of this stage, so in order to return to the lab, you'll need to walk back to the teleporters through which you arrived. On the way, you'll need to walk back through the small passage that only Mikey can fit through. If, unfortunately, Mikey perishes before you make your return, but you still have King Kong at your disposal, he can actually jump over the wall (shown left) and make it back to the outside of the city. If you lost both Mikey and King Kong… the only way to return is to have your entire team killed, and continue your game.