Koneko Monogatari: The Adventures of Chatran 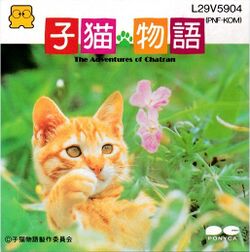 Koneko Monogatari: The Adventures of Chatran is a game developed for the Family Computer Disk System in 1986 by Pony Canyon and the NES in 1987. It is actually a movie license title based on the cinema release of Koneko Monogatari, better known in the United States as The Adventures of Milo and Otis. The movie is an award winning live action film about an orange tabby cat named Milo and a fawn pug named Otis. The original Japanese version was released in 1986 and the reworked English language version was released in 1989 in the United States. Initially filmed in Kitakyushu, Japan, the film was completely revamped, trimmed and westernized. The film was edited together from 400,000 feet of footage, shot over a period of four years.

The video game representation of this movie is quite different, and regretfully slow. It gives the player control over the kitten Milo, as he attempts to navigate through a side scrolling world of trees, hostile animals, and other obstacles. Milo plods along at a very slow pace, and can jump from tree branch to tree branch, popping fruit out from the leaves, which he must collect before they turn rotten and disappear. Every moving object from mice to beetles, is lethal to Milo and must be avoided. Fruit can be dropped on enemies for extra points. Eggs can be collected to use as weapons which must be dropped on enemies. Bottles of milk grant temporary invincibility. And if the player manages to collect four eggs that spell out the word HELP, Otis will appear to attack enemies that are headed Milo's way. However, touching Otis will also kill Milo.