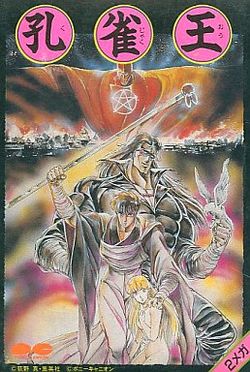 Kujaku Ou (孔雀王, Kujaku Ou? lit. Peacock King) is the first of two Famicom adventure games. This game was developed by Graphic Research and publish only in Japan on September 21, 1988 by Pony Canyon. In it the player takes the role of a band of heroes fighting against evil demons. The player interacts with the story by selecting actions from a list of options on screen (look, take, talk etc) and by a simple 'point-and-click interface.

The game is based on a manga which began serialization in 1985. The main character Kujaku is a Buddhist monk who specialize in exorcism, devil hunting. He is a member of Ura-Kouya, a secret organization in Japan that specialize in demon hunting. This particular game is thought to be inspired by the events which take place in the first OVA of the series.

The game was ported for play on the MSX2 Japanese home computer. Two days after the Famicom release, a different game with the same title was published by Sega for play on the Sega Mark III, containing some of the same RPG elements but primarily presented as an side scrolling action game. It was released on the Sega Master System in the west as SpellCaster. The Famicom version of the game was fan-translated into English in 2009, and a patch for the translation can be found here.