Published by Data East in 1985. As expected, the graphics are quite limited.

Developed by Activision and published in 1987. One of the last commercially developed games made available during the Atari 2600's market lifetime. Quite limited compared to the arcade version, but rather well done for an Atari 2600 game. 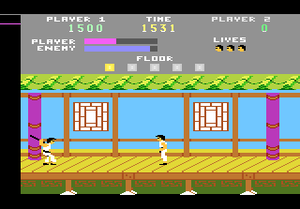 Developed by Absolute Entertainment, an off-shoot of Activision, and published in 1989. Having been published after the NES version rose to popularity, copies are quite rare and hard to find.

Developed and published by Nintendo in 1985, for the Famicom in Japan as "Spartan X", and for the NES around the world as "Kung Fu". One of the most complete and most popular conversions of the game. Every feature of the arcade is found in this version, albeit with simplified graphics. 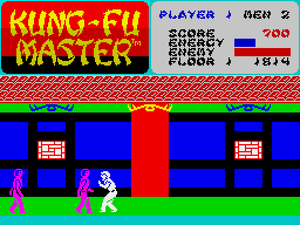