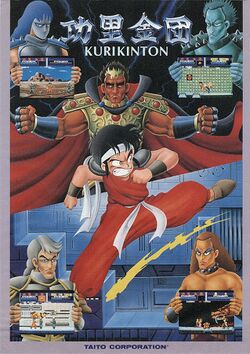 Kuri Kinton is a beat 'em up arcade game that was released by Taito Corporation in 1988; it runs on the company's L-System hardware, and is set in 2000 (which was 12 years in the future at the time). The player has to use an 8-way joystick to take control of the eponymous "Kuri Kinton", a member of the fictional "World Secret Police Organization" who has been sent on a mission to rescue one of the organization's fellow members (and his daughter) as they are being held captive by the leaders of an upcoming coup, with two buttons to make him attack and jump (pushing the joystick upward will also make him perform a short jump) - and holding down that Attack Button shall not only charge Kinton's power, but it will also grant him a special fighting technique. Furthermore, there are three differently-coloured "Auras" that Kinton must use to defeat his enemies; Red (which increases his attack power by 1.25 and his defence power for one hit), Yellow (which shall increase his attack power by 1.5 and changes his defence power to red after one hit), and Blue (which increases his attack power by 1.75 and changes his defence power to yellow after one hit). There are a total of five stages in this game, and Kinton has to fight one of the coup's leaders as a boss at the end of each one - and if he defeats the leader, he shall receive a score bonus and additional energy before proceeding to the next stage.