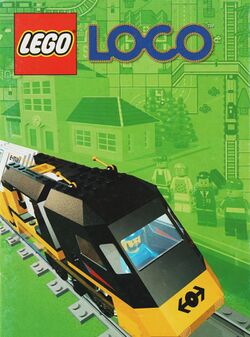 LEGO Loco is a Lego-branded children's game for the Microsoft Windows platform. It is a simple open-ended construction game with a slight emphasis on Rail Transport. The aim of the game is to construct a town in which Lego people can live. The game lacks any real challenge (there being no construction costs, no running costs, and no budget in general). That, coupled with its very colourful graphics, help to designate its target audience, which are children aged between 6 and 12. The game is LAN networkable over TCP/IP LAN, TCP/IP internet and IPX.

At the beginning of the game, the player has a "Toy Box", in which he/she can select buildings from its lists and place them directly into the space provided. The player can put down roads, railway lines, stations, crossings, buildings and scenery. To start the simulation, the player must close the Toy Box and the town will come to life (though the player can open it again to make some changes, save the town, or open a new one). After a while Lego figures will begin moving into the houses provided (if any), and the player can, like with ordinary figures, pick them up and place them somewhere else. This can affect the figure's mood, depending on where it's placed.

There are several easter eggs in the game, including the ability to breed animals in a field, the transformation of skyscrapers into giant robots, and even season-themed objects. The said objects will, however, only appear when the season is right (adjusted to the computer's clock). For example, giant eggs and tree blossoms will only appear around Easter; whereas presents, bells, and a plane flying by with a banner saying "Merry Christmas" will only appear in mid-December. There are also snow-covered versions of normal items.