Just outside of the hotel is a set of porta-potties, barricades, and other signs of a general rally point for a former evacuation point. 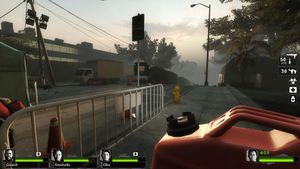 Exit the building to the outside area. The infected will approach from both the front, and to the right of the barricades. Advance forward to the CEDA Evac road sign, showing that you need to get to Liberty Mall. The place will generally have a few items, especially in the tent facing the sign.

Walk down the street until you reach the fencing, then enter the side building. In some cases, you may find the first witch in or near this position. Head down the stairs, and open the side door to continue.

When you head outside, the street will extend to the left. Head in that direction, walk across the grass, and climb the wastebin over the concrete barrier. Defeat the infected before you approach the next building, where you can collect replacement weapons and ammo as required.

When you exit, there will be a drop to the left. Kill any infected from this vantage point before dropping down. Climb the steps of the building on the right, and circle around them to the staircase.

This staircase leads to a bridge that places you outside the gun shop. Head down the stairs and into the building, and collect any gun that you want along with laser sights.

Press the button on the intercom to open the back door. The gun shop owner will open the path to Liberty mall in exchange for some cola. The door to the shop will be highlighted; approach them, and when you are ready, break into the market.

The cola is highlighted and in the back of the store. Run to the cola as quickly as possible. Before you can bring it outside, there will be a large horde charging towards you; since there is only one major access point, you can hold this position to take out the infected that stream constantly. Eventually, there will be a short gap that you can use to escape. Take the cola and run; make sure you protect the cola carrier, as he cannot fire at the same time as holding the cola.

You can't directly head to the gun shop; you have to take a left turn around the wall before you can reach the stairs leading to the owner. At the upper door, place the cola in the slot. When it's received, a rocket will be fired at a fuel tanker, clearing the path and silencing the alarm.

Liberty mall is behind the tanker, and left at the first turn. You will have to go through a car park, with some tents and car alarms.

There are several respawn points that the survivors can use: