Fighting the bosses can be the most difficult aspect of the game if you are not prepared, and do not know what to expect. Understand that the boss you face will be determined by how many Crowns you have currently collected, not by which Crown you collect, or by who is collecting the Crown. This means no matter who you have collecting each Crown, and in what order, the order that you fight the bosses will always be the same. As discussed in the "Collecting Crowns" portion of the Walkthrough, it is important to plan out what order you intend to collect the Crowns so as to match up the fights as closely as possible.

Bosses are the only enemies in the game that can fire projectiles. While they don't do as much damage to you as physically touching the bosses, they do fire a lot of them, and they tend to target you no matter how you move. There are two important things to note about these projectiles:

In addition to equipping the Shield, bringing an Elixir with you into the fight is also quite wise if you have space in your inventory.

Each boss is fought in their own designated lair. These lairs have an abundance of topological features that can be exploited to give you cover and an advantage in the fight. Note that bosses fire projectiles as quickly as they are able to, so it is in your best interest to do the same as soon as you are within range. There are two general strategies to fighting bosses: Attack from a safe distance, or rush in and crush them as quickly as possible. 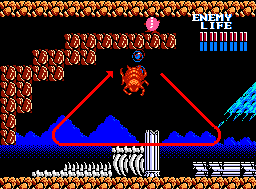 Power Knuckle (or Fire Rod for Pochi)
While it is entirely possible to attack this boss from the safe position illustrated on the right, the fact is that Taratunes is so weak (relatively speaking), that you shouldn't have a hard time attacking him up close and finishing him off rather quickly. In fact if you fight him with Pochi, and you do not equip the Fire Rod, you have no choice but to attack up close. Given that he has very little hit points compared to the other guardians, you can wipe this guardian out within moments of contacting him. 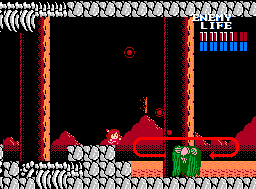 Power Knuckle
The second boss is skeleton wizard named Erebone. He is not as maneuverable as Taratunes was, and has a greater tendency to remain on the ground. There is no particularly safe location in his lair, but if you stand on the spot shown to the right, he will hit the stairs and reverse direction for a short while before realizing that you are behind him, and decides to turn around. His projectiles are stronger than Taratunes, but physically touching him is actually weaker. Given the short extension that his health meter has over Taratunes, it won't take considerably more effort to run up to him and shoot him as quickly as possible and knock him out before he can do considerable damage to you. 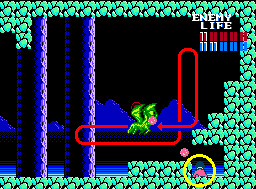 Shield
Archwinger not only has a lot of health, his projectiles are the fastest of all the guardians. This makes him extremely dangerous, since you will have to deal with shooting down his projectiles long before you can start dealing with him. You start on the left side and must head to the right just to see Archwinger, who is restricted by the terrain to the right half of the screen. On your way to meet him, the path will split into an upper path and a lower path. The upper path can afford you some protection, but the safest location is the crevice in the lower right corner of the lair, which Archwinger cannot fit into. Regardless of where you position yourself, you will need to fire quite fast in order to overcome the speed of Archwinger's projectiles. 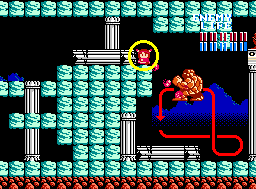 Shield
Rockgaea, is without question, the strongest guardian in the game, even surpassing the Dragon King in strength. With immense health, it can be quite difficult to survive the fight with him long enough to reduce him down to zero life. But there are a couple of things that work to your advantage: his projectiles are slow, he's even slower, and most importanly, he's dumb. The image to the right shows where to best stand in order to fight against him. One thing to note about this position, is that it is important to remain as far to the left of the ledge as possible. If even one pixel is hanging over the right edge, he can touch you and use you to climb up to the ledge and kill you. From your location, fire down or down and to the right. The arrows indicate where he is likely to move, but you may luck out even further if he decides to stand directly beneath you. If he does this, he will not move from this position, and you can bombard him with shots until he is defeated. Remember to keep firing even after he dies, as he will continue to fire projectiles at you while he drops away. If you lose your health before he disappears, you will die and lose the battle. If you happen to enter this battle with Lyll, you will need to use the Power Knuckle in order to have any hope of beating him, which will expose you to his projectiles.

If you attempt to beat Rockgaea with Pochi and you don't have the shield, enter the battle with 3 magic potions. They're 40GP each at the shop below Pochi's crown. As the battle starts walk to the right shooting every projectile that comes your way. Pochi can only take a couple hits before he's toast. Stand on the ledge mentioned above and keep firing towards the enemy. You'll hit him when he gets close to you. He'll inevitably get stuck underneath you but Pochi's attack can't reach that far. You have to move to the left to draw him out and get him jumping around again. Keep doing this and refill your magic as needed. Eventually you can take him down. 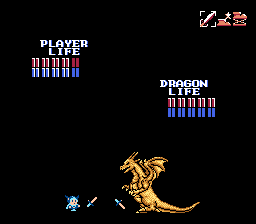 Dragon Slayer
Only Roas can enter into battle with the Dragon King Keela (or Dilgyos). And the only way to activate this fight is to collect the fabled Dragon Slayer sword and bring it to the room with the Dragon painting. Once the painting is positioned on the right side of the screen, the Dragon King will come to life and attack you in an effort to regain his freedom, restore his power, and return terror to the land. Once he comes to life, the rest of the dungeon will fade away, and only Roas will remain. You will be able to see both the life meter of the dragon and Roas. Your magic meter will disappear, and for the remainder of this fight, you will be granted infinite magic. Although you can see your inventory, you cannot change to other items, which means that you must win the fight without Elixirs. Do not jump or try to fire your sword at the dragon's head, you can damage him most effectively by attacking his feet. However, you do have to watch out for his power breath attack. You will receive very little warning before he sprays the ground you stand on with fire, so be prepared to jump away to the left at a moments notice. Failure to react quickly will result in you losing a significant amount of health. All that you must try to do is to attack as rapidly as you can from the farthest distance possible and still hit him. If you get too close, he will attack. After approaching you for a while, he will hop into the air and float back to the right. Move in for another round of attacks when he lands. Don't rush in, or he will quickly descend and blast you with flames. Keep chipping away at his life as carefully as you can until his life meter is depleted.

In the MSX version, a successful hit will usually cause the dragon to roar, breathe fire, and inch forward. If you do not stop attacking him as he approaches the left side of the screen you may be trapped. Simply take a short break to allow him to fly away.

There is an alternate strategy that is extremely deadly, both to you and the Dragon King. Roas can fit perfectly in the space between the fire and the body of the dragon. You need to get in just the right spot, underneath the fire but not touching his body. Once he starts breathing fire he won't move so you can mash the B button as fast as possible. You will need to have the timing of the fire down perfectly though. When he stops breathing fire and starts moving you need to stop attacking and start inching away from him, attempting to stay in the perfect spot. If you do this successfully you can literally take him down in 15 seconds. However, if you fail you will most likely get caught in the flame and have most of your life depleted by the time he stops.