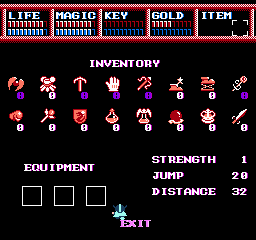 Throughout the game, it is important to pay attention to several aspects of a players status. Some of a players stats are constant, while others change throughout the game. The stats which change are always shown in graphs at the top of the screen, whether the screen is showing the game action, or the inventory. Stats which are more permanent are only shown on the inventory screen (shown left) when the game is paused, or when leaving the house or an inn.

Changing stats are represented by a graph composed of a two rows of meters. The top row contains ten red bars, and the bottom row contains ten blue bars. A blue bar represents a single unit, while a red bar represents ten blue bars. For example, if your life currently has six lit red bars and four lit blue bars, you currently have 64 units of health. If your magic contains only five lit red bars, and you use one unit of magic, one red bar will disappear, and nine blue bars will light up. In this way, the maximum you can have of any stat at any given moment is 110 units.

There are three stats that apply to each character which are fixed, and can only be altered temporarily by equipping a particular item.

Each family member has enough capacity to bring three select items from the inventory into battle with him or her. Not every member can utilize every item. When selecting items from the inventory screen, you may only select from those items whose number is white, and greater than 0. You may not select any item whose number is printed in purple even if there are some available. The items that you select fill in from the right and scroll to the left. After three items are selected, selecting a fourth will return the first selected item back to the inventory. Selected items appear in both the three Equipment boxes to the left of your fixed stats, as well as up in the items box to the right of your changing stats.

Go to top
← Legacy of the Wizard | Gameplay | Family members →