Legacy of the Wizard/MSX2 changes

Dragon Slayer IV was originally developed for the first MSX computer. While this version was used as the template for the Famicom and NES version (Legacy of the Wizard), the MSX2 version was given a slight rearrangement treatment. While the basic mechanics of the game have been left alone, some sections of the map have been altered, and many of the key item locations have been changed. In addition, the MSX2 version does not feature the smooth scrolling found in the Famicom/NES versions. Instead it operates exactly as the original MSX version does, which each room being broken into four sections that are redrawn when the player gets close to one side of the screen or the other. The player may only reach the edges of the screen when they approach the boundary of the room.

Many key items have been relocated in the MSX2 version. On the down side, this means you will have to explore the entire map in order to discover their new locations. On the up side, the new arrangement of the items allows you to complete the game by collecting the crowns using players of comparable strength without having to do any revisiting of anyone's area if you locate all of the necessary items (with the small exception of Xemn). Below is a summary of how the items have been rearranged.

While some changes on the map are minor or superficial, such as the adjustment of the dragon portrait to the left, no character's section of the dungeon has been altered as dramatically as Lyll's has. View the map below for reference. 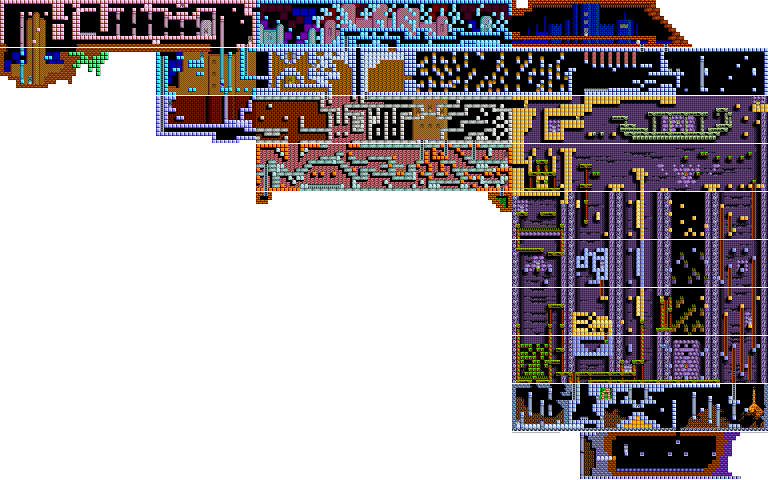 As you can see, much of Lyll's dungeon has been redesigned. She is still responsible for collecting the Fire Rod as well as Meyna's Wings, but the methods to collect them have been altered. The lower right hand portion of her dungeon has been changed significantly, having become a set of vertical tunnels, some of which she can use to ascend, and others which can only be used to drop down. The Fire Rod can be found below these tunnels, all the way to the left of the room with the volcano in the background. The Wings have been relocated as well. They are now found one room above the volcano room, just to the left of the right edge of the room. They can only be accessed from the left side, and the require the use of the Jump Shoes in order to collect.

While the general path to Lyll's Crown remains essentially the same, some of the rooms that must travel through to reach the crown, especially at the end, have also been changed. You can also utilize the Lion shortcut described on Lyll's page, although it is a little harder to access (you must stand on top of a monster to jump from the room below to the ledge containing the Lion.) That being said, the method to approach the Crown is slightly easier than in the original version. You will not be forced to hit the jumps perfectly in order to reach the chest. However, you will have to break one difficult block in the middle of a jump over some spikes in order to get to the left side where the Crown is.

Another significant change to the MSX2 version is the way that Crowns and Portraits interact with one another. In the original MSX version, and the Famicom/NES version, the player is required to have all four crowns before Roas can use them below the portraits of Princess Celina to warp around the dungeon. Those portraits are found primarily in the common area of the dungeon as well as in Lyll's section of the dungeon. However, in the MSX2 version, there are many more portraits scattered around all family member's dungeon portions, and some of the portraits can be activated with as few as just one or two Crowns.

Some of these portraits will even allow Roas to warp fairly close to some of the family member's Crown areas, but in truth, only Xemn's Crown can be reached with only one crown in the family's possession. The rest require all four Crowns. Still, this allows for an interesting alternative battle. Although probably a bug, if Roas collects Xemn's Crown as the second crown, he will fight Taratunes again instead of Erebone, making the battle quite easy for Roas. The third Crown guardian will still be Archwinger.

As it turns out, Lyll can no longer be used to collect the Shield from the hidden shop. Instead, only Roas has the ability to warp to the shop's location and purchase the shield, but only once two Crowns have been collected. This means that the first two Crown guardian battles must be performed without the aid of the Shield. It can only be made available for the last two Crown guardian battles. Read on to learn about the method to obtain the shield.

In order to collect the Shield in the MSX2 version, you must employ Roas after you have collected two Crowns. You must then take Roas to the room with the portrait of the Dragon King. You can take a shortcut by utilizing the Celina portrait that you pass on your way to the portrait room at the bottom of the long ladder that leads to the entrance. In the dragon portrait room, access any one of the four Celina portraits that can be found in the corners to be warped to the location of the Shield shop. Once there, step inside to purchase the shield. After you are done in the shop, return outside, and use the crown once more to return to the room of the dragon portrait.