Legacy of the Wizard/Pochi's area 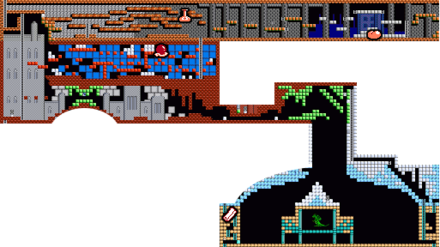 Left side of common area

Right side of common area

The common area of the dungeon serves as the entrance through which all family members must pass. Ordinarily, players will climb down the ladder and immediately drop three levels before traveling to the right and dropping several more levels to reach the dragon painting. From there, their paths will part. However, there is one very important reason to visit the right side of the common area at least once, and that is to collect Xemn's block moving glove. As you are likely to start with Pochi, it makes sense to review the collection of the glove at this time.

From the entrance, simply run to the right across the top of the first room until you can fall to the floor. Continue running right along the floor, jumping over the steps that appear along the way. There are a couple of treasure chests that you will encounter. In the third room, you will find a chest containing money. It is a good idea to leave this chest alone until you are prepared to purchase the Shield. Continue running right into the fourth room.

Once you arrive in the fourth room, your goal is to reach the ladder on the right side. There are a couple of ways to reach the floor below, but the easiest way is to remain along the top level of blocks until you reach the gray blocks. Drop down the first gap, and push through the illusion block to reach the floor. To the right, you can walk through another block above the shop. Finally, one more block can be removed above the ladder to leads to the room below. This room contains an arrangement of blocks that resembles a large whale. Run to the left side of the whale, and jump from the steps to the nose, and then up to the top of the fish. You will drop down the "blowhole" of the whale behind the eye, and proceed along the digestive track, where you will find the

Glove. From there, follow the digestive track to its inevitable end to drop to the floor below. Retrace your steps and begin to journey back to the dungeon entrance. 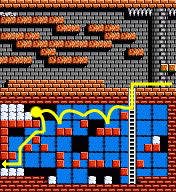 From the fourth room of the top level of the dungeon, proceed back to the left until you reach the first room again. Instead of climbing the platforms which will take you back to the ladder that leads to the dungeon exit, drop down the first ladder that you encounter along the floor. Your goal here will be to hop across the upper platforms and reach the treasure chest on the left. This chest contains a

Crystal, which will be useful to instantly return a family member to the dungeon entrance from any location. Once collected, you can drop down to the floor and continue moving to the left. Eventually you will see the long ladder that disappears above and below the screen. Either use the platforms to reach the ladder so that you can climb up and return home, or simply dive off the platform to reach the floor of the room below (at the cost of one unit of health).

Assuming you proceed to the bottom of the ladder, run to the right through the room full of Wizards. Then access the room to the right. There are a couple of enemies to watch out for in here, including the Elemental which resembles an ordinary block, but is in fact harmful to touch unless you are Pochi. From the edge of the platform beyond the Elemental, jump off to the right and dive down to the heart of the dungeon where the dragon painting can be seen. To reach Pochi's area, simply run to the right and climb down the ladder in the lower right corner. 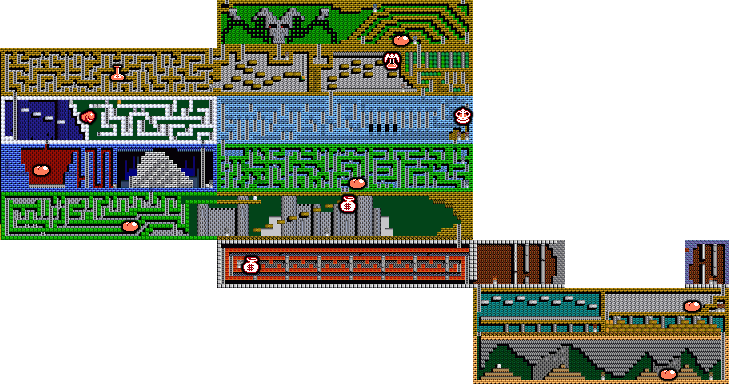 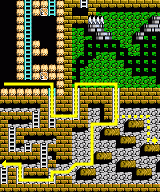 The entrance to Pochi's area contains a few long open rooms which can be bypassed almost immediately. After climbing down the ladder from the dragon painting room, you will switch through several rooms in rapid succession until you are in a green room with an intricate design on the wall. Drop down the next ladder that you see to return to the room below. Unless you are concerned with collecting an Elixir, you can move to the left and drop down to the floor, and head into the room to the left. You will need at least one key to unlock the door and access the rest of Pochi's area.

If you would like to collect an Elixir, head to the right after you climb down the ladder from the green room. Remain along the upper platforms until you reach a thick column of blocks. Many of the blocks that compose the column can be walked through, including a high and low entrance on the left, and a middle exit on the right. On the opposite side of the column, you'll have to keep Pochi on the platforms above the spikes that line the floor. If you stay on top of them and proceed all the way to the right, you will find a treasure chest containing an

Proceed through the maze in the room that lies immediately below the dragon painting. Although enemies whiz through the corridors, they are no threat to Pochi. You must remain along the top paths until you reach the ladder on the far left side. Then climb down to access the ladder to the room below.

Power Knuckle Shortcut
Rather than following the long path to the Power Knuckle, it's possible to exploit Pochi's immunity to monsters to reach the Knuckles very quickly. The dashed line shows the path that Pochi can take by riding on top of floating fish known as Prandis to reach an illusion block just below the ceiling to access the right side of the room. From there, simply drop down to collect the Power Knuckles from the chest.

After climbing down the ladder, you will be in a blue and white room. Unless you intend to utilize the shortcut described to the right, simply climb down and advance to the ladder that leads to the room below. This ladder ends abruptly, and you will be deposited into a pit with a bed of spikes. The chest over the spikes contains bread. You can escape from the pit by jumping up to the blocks on the right. A path of illusion blocks will lead to the ladder on the right. Climb up, and start pushing to the right to fall through the illusion blocks to reach the door on the floor. Unlock it with a key, and approach the white structure to the right. Ignore the ladder and push through the blocks. You will find a arrangement of blocks which can be removed to form a stairway to the right. That will end and you must proceed to drop down to the left. At this point, you may find the block which disappears and leads to the room below. If you do, climb back up, and continue moving to the right until you drop down to the floor and head to the ladder that leads to the room above. Follow the lowest path through the blocks, until you reach the wall where the chest is resting. Ideally, you should climb up the ladders, crashing through an illusion block to reach the upper ladder, and make a difficult jump to a small platform so you can drop down to reach the chest. But it is more practical to simply jump on an enemy or an egg that appears in mid-air to reach the chest. Once you reach it, you will use a key to unlock it and collect the

Power Knuckle. If you intend to wait to collect Pochi's crown, you can return home at this time. Otherwise, continue following the walkthrough.

Once you collect it, return to the room below (either by retreating the way you came, or by looping around through the illusion block at the top of the wall) and drop down to the room below by passing through the path contained in the white blocks. To make it through this next maze, employ a similar philosophy as you did to the last maze: remain towards the top of the screen as you travel to the left until you reach the ladder on the far end, and then climb down to the bottom. From there, simply walk all the way to the right. 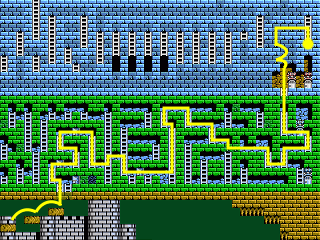 You will be in a yellow room with a fortress in the background. A set of floating platforms will rise off the ground leading to the ceiling above. Before you worry about these platforms, it is a good idea to ensure that Pochi has at least five keys. Pochi must jump from one platform to the next until he reaches the very top. The leap to the last platform can be difficult unless he leaps from the very edge of the second to last platform, or if he exploits a nearby enemy to help him reach it. The chest on this platform contains a bag of money which will certainly help (at the cost of one key). Then Pochi must leap up through the ceiling above the chest to discover a room above.

This room contains a series of pathways, ladders, and doors. At least three of them must be opened. Unless you happen to have two extra keys, ignore the door and the chest to the right, which contains bread. Follow the path illustrated above, which will take you through three doors before you climb up to the top of the room. You will then work your way back down until you reach the middle of the room, where there are two illusion blocks that you can pass through the access the final portion of the room to the right. Follow the path to reach the ladder that leads to another illusion block in the ceiling. Jump through it to arrive in the room above.

At this point, you may wish to use the Inn to refuel your life and magic meters, as well as changing any of your inventory items. Pochi can make use of the Shield if you happen to possess it, although the battle against the first two bosses aren't so tough for Pochi that he would require it to succeed. You will see many treasure chests in this room, but the truth is that all but one are Mimic monsters. The only true treasure chest is the one immediately above the Inn. The Mimics in this room are so powerful that they will kill any other member of the family in one hit, including Xemn and Roas even if they happen to be wearing armor. Rather than killing Pochi, they actually serve as assistants. The Mimic which lies closest to the Shop can be used to help boost Pochi into the illusion blocks that compose a corridor above the floor. From this location, Pochi can jump up to the platform above (crashing through illusion blocks), and then leap once more to another platform to the right, which will lead to the ladder above the true chest. In this chest, you will find the

Crown. The boss that you fight will be determined by the order in which you collect the Crowns. See the bosses page for more information.