Legacy of the Wizard | Table of Contents | Gameplay | Walkthrough

to bring up the inventory screen shortly before landing. Then press

again to return to the game, and your character will fall to the ground as if he or she had just started falling.

Incidentally, if you hit the ground after you fall, and press

, or happen to enter an Inn or Shop that resides right where you landed, you will appear at the bottom of the screen in your falling animation.

You can jump to places much higher than a character would normally be able to reach. Jump once by pressing

, and at the peak of your jump press

to pause the game. Make sure you're NOT holding

anymore, and unpause the game by pressing

. Allow your character to fall a small amount (the character must fall by at least a pixel in order for this to work) and then press

to unpause again, and immediately afterwards (while the inventory screen is still fading out) begin holding

. Your character will jump from mid-air instead of falling. You can repeat this process ad infinitum to reach great heights. 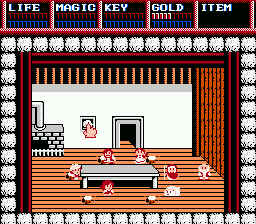 To activate a sound test, enter the following code on the title screen. On the second player controller press and hold

. While holding those buttons down, pick up the first player controller and press

. With all of those buttons held down, press

on the first player controller. If done properly, you will hear a tone that indicates that the code was successful.

Now point to the picture of the family ancestor on the wall, and press the

button to hear different music. It will cycle through each of the songs played in the game. 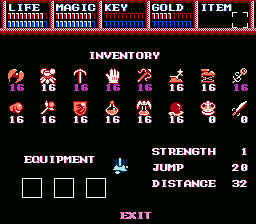 To activate a code that provides you with 16 of every item (with the exception of Crowns and the Dragon Slayer, you must first enter the sound test code described above. Once that code is entered, continue with the following steps.

If you examine your inventory screen, you will have 16 of every item except the Crowns and Dragon Slayer. Additionally, you will have many extra lives. If you die, you will be automatically revived as if you had the Elixir activated in your equipment. You will have 110 keys and 110 Gold. If you collect any other instances of an item, you won't earn any more.