The goal of the game is to use Xemn, Meyna, Lyll, and Pochi to collect each of the four crowns by defeating four guardians. Succeeding in that task will allow Roas to use the crowns to locate the Dragon Slayer and ultimately use it to defeat the evil King Dragon who is imprisoned in a painting in the center of the dungeon.

The dungeon consists of 16 floors, and each floor is composed for four long horizontal rooms. In the NES/Famicom version of the game, the screen scrolls smoothly from one end of a room to the other. However, on the two MSX versions, each room is further broken up into four screens. While the view of the room may change, you are still considered to be in the same room until you actually move your character off the left or right side of the screen.

In order to collect the crowns, you must send each family member into a portion of the dungeon that is specifically suited for that member's special abilities. The following map shows how the dungeon is divided among the different members. 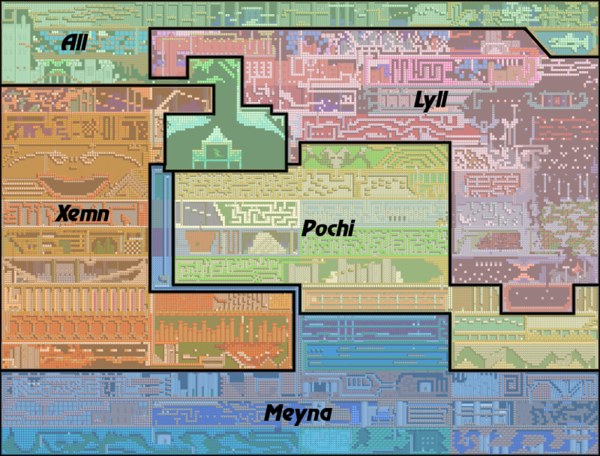 Lyll, Meyna, and Xemn all need particular items in order to reach the locations where the crowns are hidden. Below is a guide to which character needs what item, and who can retrieve it for him. Note that this walkthrough assumes that all items are found and not purchased (with the exception of the shield which can only be bought in a secret store.)

The Crowns can be collected in any order that you like. There is nothing forcing you to collect one family member's Crown before another's, other than the collection of required items. However, the order in which you collect the Crowns is in fact important. The reason the order is important is because each Crown's guardian becomes progressively stronger.

The first Crown you collect is guarded by the weakest boss, regardless of whose Crown you collect. The next Crown is guarded by a stronger boss, and so on, until you reach the fourth Crown which is protected by the strongest guardian in the game. For this reason, it is a good idea to use some strategy when going after the Crowns. The safest way to collect the Crowns is to pair each family member with a guardian according to their compared strength.

The safe method has you using each character at least twice; once to go through their area to collect all of the valuable items they can find, and a second time to collect the Crowns in a safe order. This means that you will have to navigate some of the trickier areas of the dungeon twice, particularly Xemn and Meyna's areas. However, it does allow you to fight the guardians with family members of comparable strength, and it allows you to enter every guardian fight with the Shield.

The quick method does as little backtracking as possible, and does not send each member of the family up against a guardian that they are necessarily well suited to fight. You must be an expert player in order to survive the later guardian fights, and you may want to bring Magic Bottles or Elixirs into the fights with you to ensure that you survive.

The locations of a few key items have been altered in the MSX2 version of the game. As a result, the method for completing the game is a little different. For more details about these changes, please read the MSX2 changes section of this walkthrough.