Legend of the Ghost Lion

Legend of the Ghost Lion | Table of Contents | Gameplay | Walkthrough 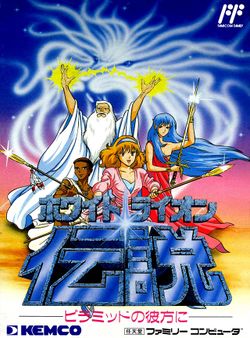 White Lion Legend: beyond the Pyramid (ホワイトライオン伝説 ―ピラミッドの彼方に―, White Lion Densetsu: Pyramid no Kanata ni?) was originally released in Japan in 1989, and later localized as Legend of the Ghost Lion in English. The Lion is always referred to as White Lion during the game; the attribute "Ghost" only appears in the localized title.

Legend of the Ghost Lion was the first Dragon Quest clone that was exported from Japan and released in western countries.

Maria's parents told her the legend of the White Lion. "Once upon a time, a great white lion attacked our village. many soldiers tried to subdue it, but to no avail. Then, one young soldier summoned all his courage, and threw his spear at the lion. The White Lion disappeared into a cave at the edge of the village, never to be seen again. We are about to embark on a journey to solve this mystery", said Maria's parents, "It may be a very dangerous and difficult journey. Please wait for us until we return. If you have any problems, go and see the village elders". With that, the parents left, but they were never heard from again.

Suddenly, the earth began to tremble, the bridge shook, and Maria fell into the river. Swept away by the violent current, Maria lost consciousness.

Legend of the Ghost Lion is a Dragon Quest clone: it has almost the same gameplay.

One difference is the party system. The hero, Maria, has to summon allies during battle.

Another difference is about the equipment. In Dragon Quest, Loto equip weapons and armors outside battle, and then keep them on; in Legend of the Ghost Lion, Maria can select a protection ring during combat, and choose the attacking weapon during every turn.

A minor difference is the absence of experience points. Maria's level is raised by finding fragments of hope, somewhat reminiscent of the Heart Containers in The Legend of Zelda.