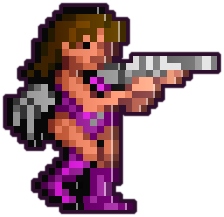 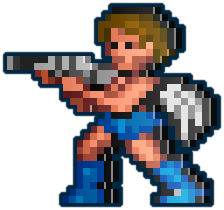 Player 1 controls Michelle Heart (female, fuchsia outfit (green in the US version); on the left) while player 2 controls Kevin Walker (male, blue outfit; right). They are given the Wings of Love and Courage by Ares, the God of War. Their assignment is to destroy "Dark" in order to ensure the survival of the mankind.

This item will increase the player's speed as well as upgrading his/her gun.

If the player loses a life, he/she will be reverted to the initial gun.