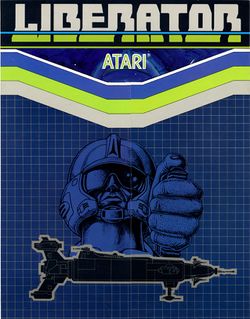 Liberator (fully titled as: Atari Force Liberator) is a multi-directional shooter arcade game, released by Atari in 1982; it utilizes a Motorola M6502, running at 1.25 MHz, with two of their own Pokey chips running at 1.789790 MHz for sound. The player must use a track-ball to direct a crosshair around the screen, with a button to make one of the four corner-mounted lasers, which will be the one closest to the crosshair, fire at flashing red enemy bases on rotating planets (the first of which looks somewhat like Earth) and another button to activate the lasers' temporary shielding - and it also features Cmdr. Martin Champion, from the company's "Atari Force" miniature comic book series, that was designed by DC Comics for them, and was included with certain titles for the Atari 2600 such as Star Raiders.