Link: The Faces of Evil/Gameplay 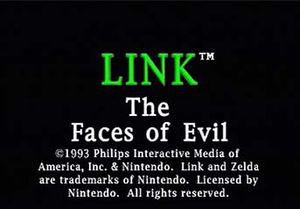 A different aspect is taken on the Zelda series in The Faces of Evil. Animated cutscenes were a first for the series, along with the new side-scrolling and backdrops. The story involves the protagonist Link, who is bored until Princess Zelda is kidnapped. He is then taken by a wizard to Ganon's forces, where Link starts his adventure.

The game drew heavy criticism from critics. First off, the creators of the game were given a limited budget to work on a game in a fairly successful franchise, which is a lot of pressure when you're working to impress the Zelda fans with a new game in the series. Second of all, the character designs took a lot of time, since the NES games (The Legend of Zelda and Zelda II: The Adventure of Link) were their only source of reference on the series and designs. Third, The Faces of Evil was supposed to work to the limit of the CD-i's capabilities, the only problem being the CD-i was a machine that wasn't even made to play video games.

All in all, it's not one of Link's memorable adventures, not even being considered canon by the company behind the series (Nintendo) itself.