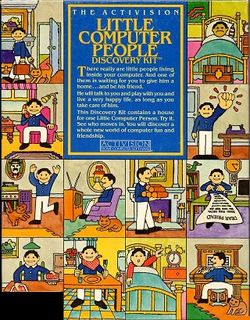 To say that Little Computer People was ahead of its time is an understatement. As the forerunner to life simulators such as Tamagotchi and The Sims, Little Computer People was developed in 1985 by famous game designer David Crane (responsible for such hits as Pitfall! and Ghostbusters). In an age when the console market had yet to be resurrected by Nintendo's NES in North America and Europe, and computers were the new kings of video games, David Crane developed a game that was not a game... and it was a short-lived hit.

The game has no winning conditions, and only one setting: a sideways view of the inside of a three-story house. After a short time, an animated character (always male) will move in and occupy the house. He then goes about a daily routine, doing everyday things like cooking, watching television or reading the newspaper. Players are able to interact with this person in various ways, including supplying food, entering simple commands for the character to perform, playing a cards and word games with him, and offering presents. On occasion, the character initiates contact on his own, inviting the player to a game or writing a letter explaining his feelings and needs.

Each copy of the game generates its own unique character, so no two copies play exactly the same. The documentation that accompanied the game fully kept up the pretense of the "little people" being real, and living inside one's computer (the software merely "bringing them out"), with the player as their caretaker.

Two versions of the game existed for the Commodore 64: the disk version, which played as described above, and the cassette version, which omitted several features (and was considered crippled). On tape versions, the Little Computer Person was generated from scratch every time the game was started up (not only on the first boot, as with other versions), and thus did not go through the "moving in" sequence seen on other versions. Also, on cassette versions the Computer Person had no memory, and did not communicate meaningfully with the user; and the card games, such as Poker, could not be played.

In Japan, Little Computer People served as the direct inspiration for the Square published Apple Town Monogatari (or Apple Town Story) for the Famicom Disk System, which is essentially the same concept, but the man is replaced by a school-aged girl, and the dog is replaced by a cat. 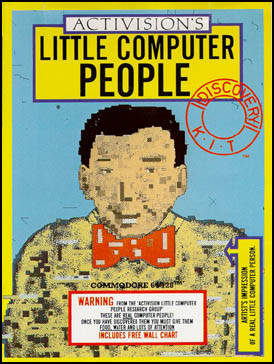 While the little computer person who lives in the house on the disk will perform most of his activities without any cue from you, there are ways for you to interact with him, some of which are vital to his comfort. For one thing, he will run out of food and water unless you actively provide him with some throughout the game. Without food and water, he will get sick and miserable and stay in bed all day. Likewise, you should help him pay attention to his dog's bowl. Other ways of interacting are purely to make him feel better, such as giving him a call, or dropping off a present such as a record or a book. And nothing makes your person happier than nice pat on the head. The happier he is, the more likely he is to listen to you when you have a request for him. But no matter what mood he is in, don't forget to be polite and say "please," or he will be less inclined to listen. In addition to these forms of interaction, your little computer person will even play games with you, including card games like War, or Poker, and word games like Anagrams. If you get bored watching him after a while, try challenging him to one of these games.

Back when this game was first published, just about every player who bought the full disk version of the game (as opposed to the budget cassette version) would receive a wholly unique little computer person (and dog), whose characteristics were based upon a serial number that was literally written to each disk that was published. This makes Little Computer People one of the few games ever made where no two original disks are ever 100% copies of one another.

In order to display every feature of the house as distinct objects, Little Computer People often had to stretch the graphic capabilities of each system to the max. As a result, the background (or wallpaper if you will) of the homes are black, in order to help the person and brightly colored objects stand out better. Most layouts of the homes are identical, except for a few alterations which were made to the Apple II version for unknown reasons.

With a far greater palette of colors to choose from, the 16-bit versions of Little Computer People benefit greatly from ability to show objects with more detail and colors. Regardless of the time of day, the scene outside is always shown lit by sunlight. Even the games that your little computer person will play with you are rendered in sharper detail.