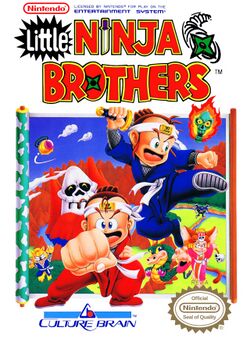 Little Ninja Brothers, known in Japan as Super Chinese 2: Dragon Kid (スーパーチャイニーズ2 ドラゴンキッド, Super Chinese 2: Dragon Kid?), is a game developed and published by Culture Brain for the NES in 1989 in Japan, 1990 in the United States, and 1991 in Europe. It is an action-RPG set in the fictional world of Chinaland, and it is the second game in the Super Chinese series. When it was localized from Japan to the rest of the world, the main characters' culture was changed from Chinese to Japanese in a supposed effort to give the game broader appeal. The game was later released on the Wii U Virtual Console, coming out at different times around the world between 2015 and 2017. Little Ninja Brothers features both real time and turn based combat and can be played by two players simultaneously. The story and presentation of the game is lighthearted and tongue-in-cheek. The goal of the game is to acquire the seven Bells of Prism and defeat the evil Blu Boltar. Some battles, usually boss fights, take place in a turn based style similar to those found in games in the Dragon Quest series. There are also some track and field based minigames which are presented as training courses and offer rewards upon completion.

Gameplay is split between a few systems. There is a top down exploration view typical of many early console RPGs where players can explore the world and talk to NPCs. Random battles occur on the world map and in dungeons. These battles are played out in real time, with gameplay nearly identical to Kung-Fu Heroes. Players can punch, use flip kicks, Miracle Kicks, throw shuriken, and use the Surger, which attacks all enemies on the screen. Miracle Kicks, shuriken and Surger attacks are limited in supply and can be obtained, along with other powerups, by breaking blocks in the battle areas with punches. Defeated enemies leave experience points and money used to purchase better equipment, healing items, and new types of shuriken and Surger attacks.