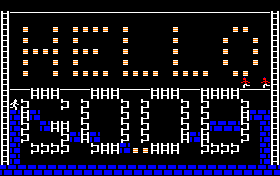 Lure the two guards into the middle area, ensuring that they do NOT grab any treasure. Then go to one side at the bottom, to make them move towards you and group up next to each other. Once they are grouped, go to the other side and wait for them to line up under those bottom two treasures, then move up. They will stop. Then, you may walk on their heads to collect those last two treasures and safely escape. If they are not positioned right, you will die trying to collect both treasures. Alternatively, lure them to one side, dig out the entire opposite side wall, delaying the last one as much as possible, and then run back up and HURRY towards the closer treasure. You can BARELY escape before the wall closes in. Repeat on the other side. 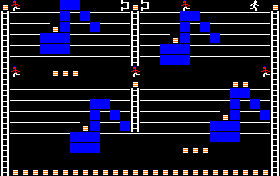 In this stage, there are no puzzles to solve like in stage 1, and the enemies will be your biggest problems here, as there are no bricks you can destroy to trap them, you will have to run of them, being careful no to be trapped in a way you can't get out.

This is a good stage to learn about the patterns of the enemies, since it will be of great help in this stage and in many others, is important to know that the enemies prioritize getting to the same horizontal level of the player rather than going after him, for an example, if a stage has two large stairs, one in the very right and another in the very left, and the player is in one of those and an enemy is in the other one, it will not descent the ladder and try to get the player in the ladder he is, instead, he will try to always be on the same horizontal level than the player.

Another important thing to know about is that the enemy also will try to get the player coming from beneath him rather than coming over him, for an example: there is a ladder, the enemy is on top of it, and player is in the ground, as long as the player is in the ground, the enemy will get downstairs to try to get him, but if the player upstairs a little bit, the enemy will fall the ladder from the highest and further side place, get to the ground and will try getting the player coming from beneath him, this may be a little confusing to explain, so I suggest you to leave one enemy at the rightmost ladder in stage 2 and trying to do this (in this case, he will be trapped in the ladder, as he can get any further at the sidemost place), and also learning to easily do this trick, as it be of great help in some stages further in the game (stage 27 is a great example of this second tech

Having learned this tricks, to do the stage just apply them in order to escape the enemies, and taking advantage of their pattern, let everyone in the right side, then collect all the gold in the left side, and vice versa. 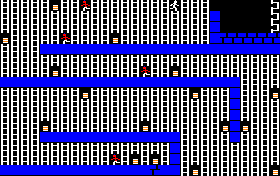 The catch here is that you have exactly one diggable square in the main level to trap guards that hold treasure in to force them to drop it. Furthermore, any that are killed will end up at the upper right and potentially block your way to the exit. So carefully dodge them, and if one picks up a treasure, try to separate it from the rest of them, and lead it to the trap square, but don't actually kill it. This is easier said than done, requiring good timing and positioning. 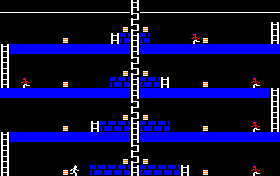 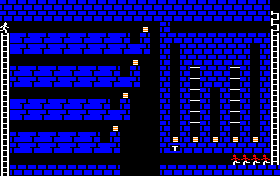 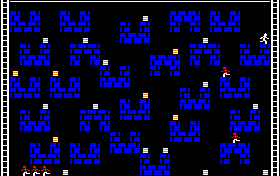 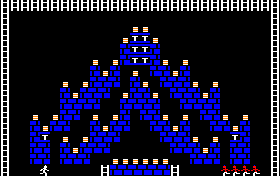 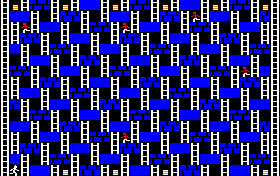 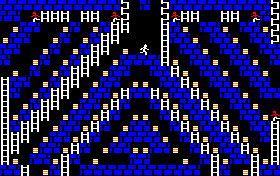 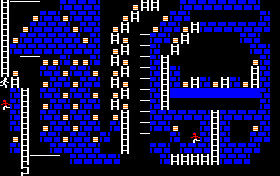