If your version has an Iris effect when starting a level, Control + Z to disable it. There are also two cheats included, adding extra lives or skipping levels.

The Commodore also had the game distributed on cartridge or datasette. These versions of the game only have 17 of the levels, returning to the first when the set is complete. 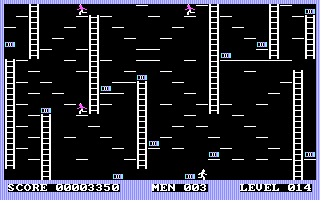 The MS-Dos version comes in four colors. It also removed two columns, making a 26x16 play area, as opposed to the standard 28x16.

While levels were changed, they were most often cosmetic rather requiring a different plan. Only rare examples actually change gameplay.