Lot Lot is a puzzle game developed by Japanese entertainment media company Tokuma Shoten. Tokuma Shoten got into the video game industry after the meteoric rise in popularity in Japan. They licensed the game for distribution in the arcades to Irem, while they published the game themselves on home platforms, including the Famicom. (Additionally, they ported Capcom's sci-fi Shooter Exed Exes to the Famicom.)

In Lot Lot, you directly control one arrow and indirectly control another which follows after your original arrow with a (roughly) four second delay. When you press the button, any balls on the compartment that one arrow points to are immediately swapped with the contents of the compartment that the other arrow points to. The goal of Lot Lot is to get as many tiny balls (which resemble Pachinko balls) out of grid compartments and down into point slots in order to achieve a designated score, and advance to the next round. 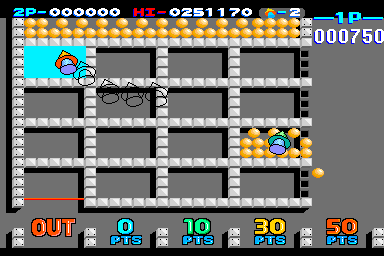 These are pictures of the various home conversions.