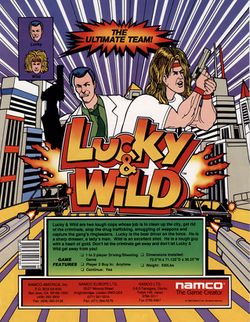 Lucky & Wild is a first-person racing/shooter arcade game, which was released by Namco in 1992; it runs on Namco System 2 hardware, and was the sixth (and penultimate) title from them to feature the Federal Bureau of Investigation's "Winners Don't Use Drugs" screen for its attract sequence. The first player's character, "Lucky" has to both drive by means of a steering wheel and accelerator pedal and shoot by means of a lightgun - while the second player's character, "Wild" just has to shoot by means of a second lightgun. The game is like a hybrid between all three Final Laps with both Steel Gunners. The players must help the two heroes catch six Wanted suspects; "Jerky", "Gambit", "Juliora", "Keel", "Bear" and "Big Cigar". As they pursue the suspect for each stage, they must fire at other enemy cars with "Big Cigar"'s henchmen in them - and they must destroy the henchmen as well as the cars, along with any projectiles fired at them and obstacles that block them. When they catch up with the suspect, they must continuously fire upon their car until its energy is depleted; if they succeed in doing so, they will have captured the suspect and will receive a reward, but if the stage's timer runs out, the suspect will escape (indicated by the text of "GOT AWAY" appearing on the screen). After every stage, Lucky and Wild will drive to the "Pink Cats Garage" (which sounds like it is run by the Mewkies from Mappy) to get their car repaired for the next stage, where they will be "entertained" by young women wearing cats' tails and ears - and the game ends when all six stages are cleared, regardless of capturing rate.