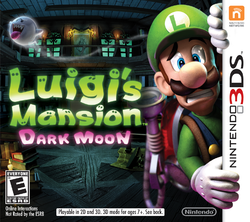 Luigi's Mansion: Dark Moon, known in Japan as Luigi Mansion 2 (ルイージマンション2, Ruiiji Manshon Tsuu?), and in Europe, Australia and Hong Kong as Luigi's Mansion 2, is an action-adventure game developed by Next Level Games and published by Nintendo for the Nintendo 3DS, and is the sequel to the 2001 game Luigi's Mansion for the Nintendo GameCube. The game was first released in Japan on March 20, 2013, and in all other regions later that month. This game is the third game to feature Luigi as the main character with Mario playing a supporting role (the first two being Mario is Missing! and Luigi's Mansion).

In Dark Moon the player takes control of the Mario franchise character named Luigi, who is equipped with the Poltergust 5000, a specialized vacuum cleaner used to capture ghosts, and an updated version of the Poltergust 3000. In the game's single-player mode, the main goal is to retrieve the pieces of the shattered Dark Moon, a magical object that has a pacifying effect on the ghosts residing in the game's setting, Evershade Valley, by seeking them out in the five haunted mansions located therein. Dark Moon offers a cooperative multiplayer mode that can be played locally or online via Nintendo Network.