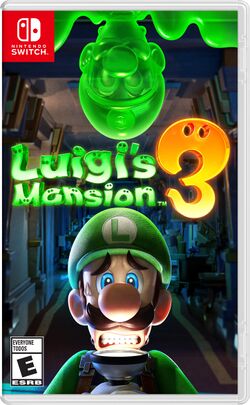 Luigi's Mansion 3 is an action-adventure game for the Nintendo Switch developed by Nintendo and Next Level Games. Unlike the normal mansion exploration of the past two games, Luigi's Mansion 3 takes place in a haunted hotel.

Mario, Luigi, Princess Peach and three Toads are invited to a vacation by Hellen Gravely, the owner of a dazzling hotel, named the Last Resort. When they arrived, they were shown to their rooms.

It turns out that it was a trap put in motion by Hellen Gravely to trap them in paintings. It is also revealed that Hellen released King Boo back in the wild after he was recaptured following the events of Luigi's Mansion. Luigi manages to escape, before seeing that the elevator buttons to save his friends are distributed across powerful ghosts in the hotel.

Luigi manages to save the Toads, Mario and Peach. King Boo makes a final appearance in the game as the ultimate boss of the game. He recaptures them all, except Luigi, who was saved by Polterpup. King Boo then tries to suck up the entire hotel in a painting because of his rage. After Luigi has captured King Boo, it is revealed that the ghosts were brainwashed by King Boo's crown gem. In the ending, Luigi and friends rebuild the hotel.

The ScareScraper is a hotel that can have either 5, 10, or 20 floors. You can play with up to 4 players. Each floor has a certain task, for example to capture ghosts, rescue Toads, or collect money. Every 5 floors, a mini bossfight is started. At the end of each level, a giant Boo named as Boolosus battles the four players within a ten minute timer.