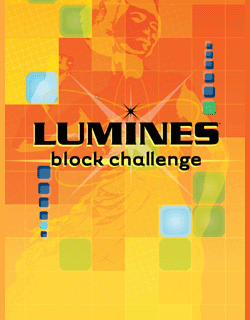 After the popularity of the original Lumines for PSP in 2005, designer Tetsuya Mizuguchi, Q Entertainment and Gameloft all agreed to create a version for mobile phones. Lumines Block Challenge was released in May 2006 and features all the main modes from the original as well as extra modes and new skins. It also includes new electronica tracks and high-score leaderboards. The game has been both well-received by critics and has sold well with it topping the mobile gaming charts when it was released.

Controls can be changed in the Options menu.

This is the main mode of Lumines Mobile. Go through all levels to unlock skins and you earn more points on harder difficulty levels. The three difficulty levels are Easy, Normal and Hard. There are also time challenges that give you gold, silver and bronze cups if you complete the level under the allocated time. There are a total of 8 stages and 4 boss battles.