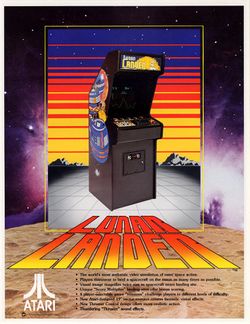 Lunar Lander is Atari's first vector game, released in 1979; it uses a Motorola M6502 microprocessor running at 1.512 MHz with discrete components for audio. The player must use two rotational buttons and a two-handed throttle lever to land a spaceship on the surface of the Moon, and can choose from four different difficulty levels ("Training", "Cadet", "Prime" and "Command") after inserting one coin for an operator-determined amount of fuel units (450, 600, 750, or 900) - and the player's score, elapsed time and remaining fuel units shall be displayed in the top-left corner of the screen, while the lander's altitude, horizontal speed and vertical speed (with two arrows to indicate its current direction of travel) are displayed in the top-right corner of it. Once the lander's altitude is low enough the game will zoom in on it as it descends down towards the landing site; however, if it looks like it is doomed to crash on the rocks, the player can press the third "Abort" button to make the lander fly back up at its maximum speed (however, doing this consumes 120 to 180 fuel units, to discourage players from overusing it). Also, if the button is pressed too late, the lander will be forced to crash on the rocks no matter what - and a good landing is worth 50 points and 50 extra fuel units, while a hard landing is worth 15 points and a crash is worth 5 (a crash occurs when the lander's vertical speed is over 15, and its horizontal speed is over 31). Landing values may also get multiplied by landing on sites with bonus multipliers.

This game was also one of the first to feature a hidden "Easter egg", because if the player managed to land on a very specific spot on the surface, it would cause a McDonald's restaurant to appear; the astronaut would get out of the lander, go into the McDonald's (and order a Big Mac to take out) then return to the lander and took off again. However, if the lander crashed onto the McDonald's, the text of "YOU CLOD. YOU DESTROYED THE ONLY MCDONALDS ON THE MOON." appeared instead.