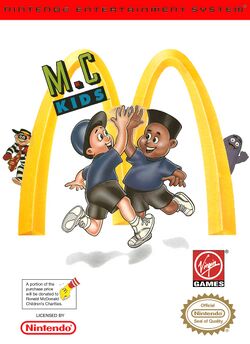 M.C. Kids is the title of a video game released for the Nintendo Entertainment System, by Virgin Interactive in February 1992 in the United States and by Ocean in May 1993 in Europe (where it was called McDonald Land). The game is loosely based on the McDonald's fast food franchise and features two teenagers that venture into the McDonald's fantasy world in order to return Ronald McDonald's magical bag, which has been stolen by the Hamburglar. The game was also released for the Game Boy, Commodore 64, Amiga, Atari ST, (though all only in Europe) and for PCs running MS-DOS (all these versions are called McDonald Land). Virgin Interactive would release another game based on the McDonald's franchise for the Sega Mega Drive called Mick & Mack: Global Gladiators that is more of a traditional side-scrolling action-adventure game.

One can choose to play either one of the M.C. Kids, but there is no difference between the two characters other than the fact that one of the youths is white and the other one is black. Up to two players can play the game at once, and both characters can walk, jump, duck, and pick up blocks to throw at enemies as they travel through the seven large worlds of magical McDonald Land.

In a similar format as Super Mario Bros. 3 or StarTropics, the game has seven different worlds. Each one starts out by having the character visit a McDonald Land character. However, unlike games such as Super Mario Bros. 3, simply defeating the various levels is not enough for success as one needs to find the hidden McDonald Land cards that are scattered in a world in order to advance to the next world.

Despite its considerable length, the game has no password system to save progress. Each time it is necessary to restart the adventure from the beginning.

Hamburglar steals Ronald McDonald's magic bag and runs away. Ronald asks his friends Mick and Mack to help him retrieve it. The kids, in pursuit of the fugitive, must cross the areas of Ronald, Birdie, Grimace and Professor. They then reach the moon and CosMc, who points out to them the hiding place of Hamburglar, inside a volcano. Once on the spot, Hamburglar informs the kids that the magic bag has escaped. They will then also have to deal with the bag itself, before they can return it to Ronald.