Certain keys can be used to change the way MAME behaves while you are playing a game. Other keys can be used to get information about a particular game. The following guide presents the more commonly used keys (according the their default assignment, which you may change at any time in the Input (general) menu of the in-game menu. See Playing MAME for more information on how to reassign inputs.)

Shows the game palette, decoded GFX, and any tilemaps. Use Enter key to switch between the three modes (palette, graphics, and tilemaps). Press F4 again to turn off the display. The key controls in each mode vary slightly:

Note: Not all games have decoded graphics and/or tilemaps. 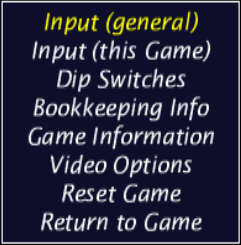 Once you have selected and started a game in MAME, you bring up the in-game MAME menu by pressing Tab. This menu should look something like the picture on the right. To learn more about Input (general) and Input (this Game), please see Playing MAME. The rest of the selections will be explained here.

Getting Started
Other
Retrieved from "https://strategywiki.org/w/index.php?title=MAME/Special_Keys&oldid=858625"
Hidden category: