The beginning of this stage is dedicated to a tutorial on the basics of gameplay. The first section will instruct you how to fight using the

buttons as well as how to jump with

. Just follow all of Agent XIII's advice as it pops up at the upper right hand corner of the screen.

In the next section you learn finishing moves, using objects and environmental hazards, and how the point system works. When this section is over, you'll be released to start playing the game on your own. Rack up 200,000 points to move on to the next section, which is your first BloodBath Challenge. Make sure you pick up the extra credit in the crate before leaving with

The Turbinator is a huge turbine engine that will suck down anything that gets to close. The area in front of the engine is checkered so you know when you need to turn around and get away from it. The Black Baron explains the rules to you, which are simple - send as many guys as you can into the Turbinator. Agent XIII will give you a hint about using the shoulder charge, but it's easier to grab enemies by holding

next to them and then shaking

to send them flying. This has the added advantage of taking whoever's in front of you with the guy you're throwing. Try and grab guys then line up to the Turbinator with some people in front of you to max you score. You get added points for killing multiple bad guys at once.

When the Turbinator lifts up, out of your way, head into the train station. You'll see a Happy Pill on your left, which you should get if you need it. You can also find Happy Pills all over the place by breaking the crates. You can run all over the station, which consists of two levels, train tracks with platforms on either side, below a rafter-like area with another set of train tracks. You can throw the Kill Thrillers into the trains, but be careful not to get in front of one, since it's an automatic death for you.

When you've racked up enough points, a Big Bull Crocker will be set loose, and you can kill him for another credit. When you're fighting him, you can use all normal attacks and evade his blows by shaking

, but to activate a power struggle, you need to close to him and move the

up when the instructions flash on the screen. If you do it correctly, you'll go head to head with Big Bull, his chainsaws against yours. Shake the

until you win the struggle. After you win you'll do him some damage, and if it kills him, you'll get the an optional decapitation move, which you can perform by raising the

up. Once you have his head off, you can pick it up and slam it down on any of the bad guys.

The Rocket Reamer BloodBath Challenge is in the upper section. You can get up there by going back up the stairs if you went to the lower section, and jumping through open wall, or you can climb the big crates down on one of the platforms. The challenge is activated once you step foot inside one of the open squares on the side of the train tracks. The goal of this challenge is to get as many guys as you can out on the tracks for when the trains come through. At five seconds out a countdown timer will appear letting you know they're on their way. If you bring an object with you, like a signpost or a tire, you can use that to incapacitate your opponents so they don't wander off the tracks. There is also a stack of tires up there you can use. 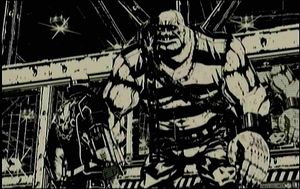 Little Eddie getting off the train to start the boss fight.

Once you've reached 1,600,000 points, the Boss Battle Challenge device will appear on the same platform where you start the Rocket Reamer challenge. Hit the gong with

and Little Eddie will be transported in on a flatbed traincar. Little Eddie is huge, towering about three times Jack's height. He's big, but he's pretty easy. Hit the only areas you can reach, which are his legs. He has a few different attacks, but they can all be avoided with your dodge by shaking

, and he gives plenty of warning before he does anything.

Eddie will also pick you up and you'll engage in a power struggle. Shake both

, then finish by pulling them apart when indicated. This will result in Jack sticking his chainsaw in Eddie's head. After this Eddie will be knocked for a few seconds, so take the time to use your chainsaw on him repeatedly. Keep using the chainsaw as he's trying to get up and it will knock him down again. Use the same strategy if you knock him down without going into a power struggle. Eventually you will deal him enough damage that the "Finish" icon will appear. Press

to activate the end moves.