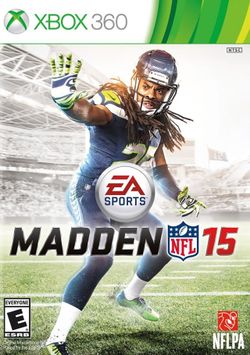 Madden NFL 15 is an American football sports video game based on the National Football League and published by EA Sports. The game was announced for the PlayStation 3, PlayStation 4, Xbox 360 and Xbox One on April 28, 2014, and was released on August 26, 2014 in the United States and Europe three days later. As in previous years, EA Sports conducted a fan vote via ESPN to elect the cover athlete for the game. Seattle Seahawks cornerback Richard Sherman won the cover vote.