This is the first game in the Magicka series. For other games in the series see the Magicka category. 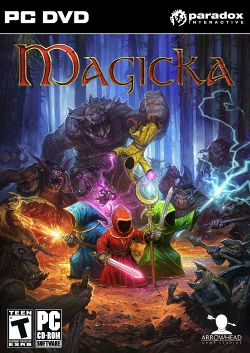 Magicka is an action-adventure game based on Norse mythology and developed by independent developer Arrowhead Game Studios. It was released via Steam for Windows on January 25, 2011. A free demo was also made available for download. The game was developed by eight students at Luleå University of Technology in Skellefteå, Sweden. It was followed by a sequel, Magicka 2.

In Magicka, up to four mages of a sacred order travel to fight against an evil sorcerer and his creations. The game world is based loosely on Norse mythology, drawing inspiration from other fantasy games like Warhammer and Diablo, while also making regular use of comedy and self-referential humor. The game also takes liberties when it comes to the classic fantasy setting, at one point supplying the players with an M60 machine gun. In expansions the game also explores a Vietnam War setting as well as the Lovecraftian Cthulhu universe.