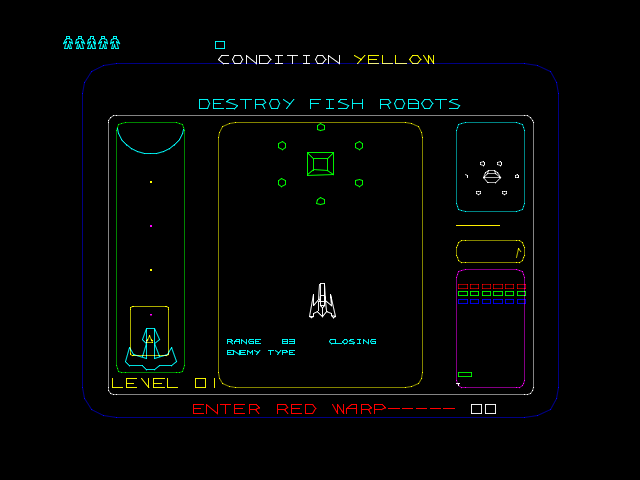 Once you've inserted your coin into the cabinet of Atari's 1983 3-dimensional shooter/platform arcade game Major Havoc, and pressed the Start Button, you shall get treated to a short cutscene of Major Havoc bidding farewell to the five scientists who cloned him and getting into his "Catastrofighter", then blasting off through a triangular wormhole; the game will then zoom out on the above screen, which displays the first level's objective ("DESTROY FISH ROBOTS") as six spheroids and the first base ship fly down towards the Catastrofighter (the Bosconian-style condition indicator at the top of the screen will change from "GREEN" to "YELLOW" to "RED" as it does so) then stops once the range descends to 32 and indicates the enemy type as spheroids. While all this is happening you can play the Breakout minigame in the bottom-right corner of the screen by using either button to launch the ball and the trackball to move the paddle left and right - and the six blue blocks are worth 1 point apiece, while the six green ones are worth 4 points apiece, and the six red ones are worth 8 points apiece. Destroying all eighteen blocks awards Major Havoc an extra life; you may also notice that the first number to the right of the text "ENTER RED WARP - - - - -" at the bottom of the screen shall increase or decrease as you roll the trackball and once you have pushed either button to launch the ball the second one will do it instead. If you enter the correct warp code (23), you shall receive 250,000 points and a warp to Level 4 - and there are also three other warp codes that you can enter this way (in order to receive a large bonus and warp further ahead in the game):

However, you can only enter these codes when their prompts appear at the bottom of the screen at the start of a level, and only in the order seen above. 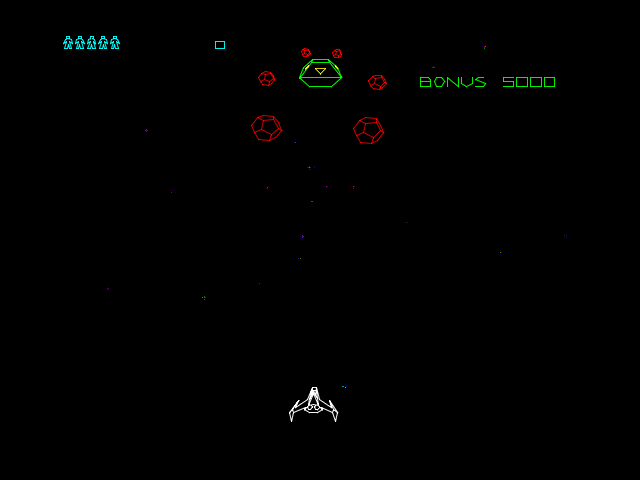 If you did not enter the correct warp code (or took too long over doing it) the first level's space stage will begin; six spheroids (which look like precursors to the Meteors from I, Robot, which was released later in 1983) and the first base ship will fly towards the Catastrofighter (but the spheroids will become Fishoids as soon as the Catastrofighter fires a shot at one of them). The Fishoids start out blue, but turn red after they have been shot - and the second shot will kill them. Once you have killed all six Fishoids, the stage's remaining time (which starts at 5000) shall be awarded to you as bonus points - and the text "DOCK ON WHITE PLATFORM" will then appear on the screen. You must now roll the trackball left or right to land within the white area on top of the Vaxxian base ship; if you miss it, the Catastrofighter will crash on top of the base ship, costing it a life (and you must try again until you succeed). 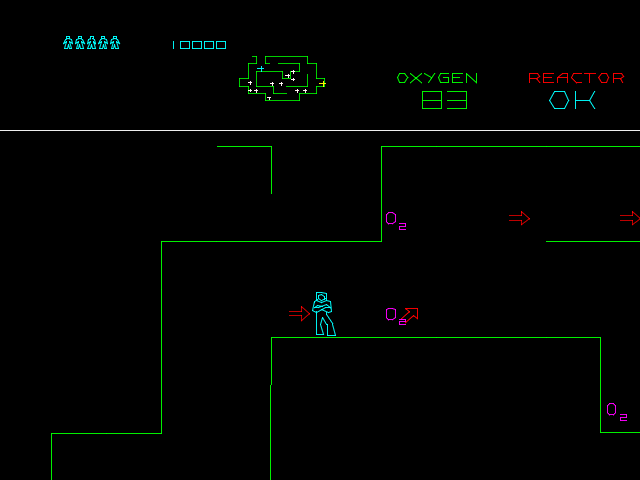 Once you have landed within the white area on top of the base ship, Major Havoc will get out of the Catastrofighter as the texts of "FOLLOW ARROWS AND TOUCH REACTOR. EXIT MAZE BEFORE TIMERS REACH 0." appear, at the top of the screen; you must then direct Havoc (who is represented by a cyan cross on the ship's radar display) to the reactor (which is represented by a yellow cross) by following the arrows and watching out for Pyroids (which are represented as white crosses). However, by pushing and holding the Shield Button Major Havoc's shield shall be activated - and any Pyroid that touches him with it activated will be killed (but immediately deactivate it as a result and it cannot be reactivated again until he loses a life). Havoc's oxygen level, which starts at 90, shall also be constantly decreasing in the base ship; to counter this, he must collect magenta "O²" symbols (which are worth 100 points apiece) for extra oxygen. Once Havoc has found the reactor and touched it (for 5000 points), the text "GET OUT" will appear below it as its colour changes from magenta to yellow and all of the Pyroids stop moving (but they're still lethal!) - and Havoc will only have a maximum of forty seconds (if his oxygen level is 39 or below it will be less) to retrace his steps back to the Catastrofighter. Once Havoc gets back in the Catastrofighter, he'll receive an "Oxygen Bonus" of 100 x his remaining oxygen level as he flies away and the base ship explodes; he'll then proceed to the next level.

The objective of the second level's space stage is "DESTROY ENEMY SHIPS", and has a formation of Flyboids emerging from the second base ship; the text at the start of its platform stage is "PICK UP DOTS FOR EXTRA OXYGEN" (it also introduces yellow "O²" symbols that shall start out at 1000 points and increase by 200 points for every subsequent one collected, along with "ONE WAY" signs which Major Havoc can only pass in the direction they are pointing, Perkoids, and ceiling-mounted guns and electrical barriers that his shield cannot protect him against contact with!). The objective of the third level's space stage, however, is "MANEUVER THROUGH MAZE", and sees two groups of Mazoids appearing on both sides of the screen to create a maze between the Catastrofighter and the third base ship (the Catastrofighter must then fly through the maze, and can fire shots at the walls with the intent of eventually destroying them for 2500 points apiece) - and the text at the start of its platform stage is "USE SHIELDS TO DESTROY 1 ROBOT OR FIREBALL" (it also introduces teleporters, which can either be coloured yellow, cyan, magenta or red, and shall warp Major Havoc to the other one of their corresponding colour when entered). Lastly, the objective of the fourth level's space stage, which is the last unique one, is "SHOOT FIGHTERS, AVOID RED LINES" and has both Flyboids and indestructible red lines emerging from the fourth (and last uniquely-designed) base ship; text for the start of its platform stage is "JUMP FIREBALLS TO AVOID COLLISION" (it also introduces keys, that can either be coloured yellow, cyan, magenta or "glowing", are worth 1000 points apiece, and can be used to unlock doors, along with a clock whose colours are inverted when touched).

From the fifth level onwards, the cycle of space stages will start over again at an increased level of difficulty; however, the platform stages will not, as that fifth level's introduces red trip pads, which will launch deadly fireballs (indicated by red crosses on the radar display) when Major Havoc steps on them. The sixth level's also introduces ceiling-mounted stalactites (which will not kill Major Havoc, if he touches them while in midair, but immediately cause him to fall to the ground) - and they are usually positioned over red trip pads, which means that if he has used his shield for his current life, his chances of avoiding the fireball that the pad launches are slim. The seventh level's also introduces ceiling-mounted mechanical hand to the left of its reactor (which must be turned off by walking over the red switch on the platform above it, because if you do not, it will come down once Major Havoc touches the reactor, and touch it again to re-stabilize it); also, from the eighth level's platform stage onwards, the arrows will be replaced by question marks, meaning the player must rely on the radar display to find the reactor. The ninth level's also introduces disappearing walls and floors while the tenth one's introduces an escape pod (which, when entered, carries Major Havoc back up to the Catastrofighter on its roof!) - and the eleventh one's introduces a pair of boots (which, when collected, shall allow Major Havoc to start a new jump as he is falling to the ground). Lastly, even though the twelfth level's platform stage has the text "KEEP PLAYING, THE HOME WORLD IS NEAR" at the start of it, the game does not have an ending and shall continue until you run out of lives; this was also Atari's last vector game, except for their last Star Wars one, The Empire Strikes Back, in 1985.