The final dungeon is tucked away in the lower right corner of the Castle. To get there, you're going to need a very special item.

When you arrive, you will notice two things; a treasure chest above you to the left that you cannot reach, and the fact that you move considerably slowly through this dungeon. These two details are related. Your first goal is obtain the contents of that chest which will allow you to move at regular speed. 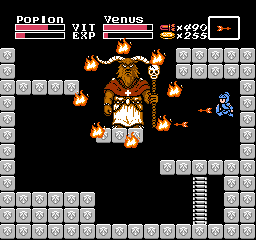 The boss of this dungeon is Galious himself. Galious will appear in one of four places before surrounding himself with a wheel of fire. This wheel spins around, protecting him and absorbing your shots. It expands once, and then expands once again before collapsing into him just before he disappears. The flames are not invulnerable and will disappear after they take enough damage, but it is difficult to clear them away fast enough to strike Galious. The only vulnerable location on his body is the cross in the center of his chest. To hit it, you must clear the way of fire. If you managed to collect the Cross, you will be in a better position to fight him, since this allows the Red Arrows to be used against him. Assuming you have the Cross, you should position yourself so that you have the best chance of hitting him.

If Galious appears on top of the middle platform, there is no good place to fight him from. It is best to wait in the lower right corner and wait for him to disappear. If Galious appears on the far right, stand on the center platform. If Galious appears on the far left, stand on the right platform above the ladder. And if Galious appears in the center on the floor, stand on the left platform. When you reach these positions, first lay down three Mines at the approximate distance where the flames will fly before they appear. Then back away begin stabbing the flames with your Sword. Between the Mines and your sword, you will eventually remove one or more of the flames. Then switch to the Red Arrows and fire away before Galious disappears. It is not unlikely that you will get hit when the fire briefly expands, but do you best to recover as quickly as possible and resume your firing.

If you employ this method of attack consistently, you should be able to cause enough damage to Galious and defeat him within two or three appearances, depending on how fast and accurate you are when laying the Mines, how quickly to stab your sword, and how fast you can fire the arrows. When you beat Galious, a chest will fall from the ceiling, and just as before, it will contain a Great Key. Only this key won't open a Castle door. Instead, when you pass through the room entrance, you will find yourself in a new room. 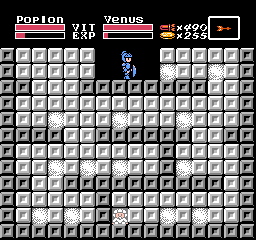 When you leave Galious' room, you will find yourself at the top of a room full of blocks. You will need to break your way from the top to various regions of the room to find what you are searching for. Some of the blocks break away, while others become walls. Some blocks hide strange fuzzy orbs which rotate around the screen and generally make a nuisance of themselves, but do not harm you. The screen shot to the right has been doctored to show you the ultimate path that you should take to the bottom of the room where you goal lies, the baby of Popolon and Aphrodite which was kidnapped from the future. If you make your way down to it and collect it, you will be rewarded with the game's ending. Congratulations.