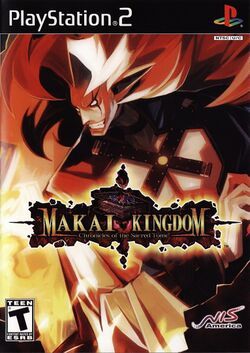 Makai Kingdom: Chronicles of the Sacred Tome, released in Japan as Phantom Kingdom (ファントム・キングダム ,Fantomu Kingudamu), is a tactical role-playing game developed and published by Nippon Ichi Software for the PlayStation 2. It was released in 2005.

The story's protagonist is a self-proclaimed "Bad-ass Freakin' Overlord" named Lord Zetta, who attempts to prevent the destruction of his world prophesied by Pram the Oracle. After discovering the Sacred Tome, Zetta finds a passage claiming that his own stupidity would be the downfall of his Netherworld. Infuriated, he burns the book, only to remember immediately afterward that destroying the book would destroy his world. He quickly responds by confining his soul to the Sacred Tome and ventures to rewrite his world into existence by having the other Overlords of Netherworlds write wishes within his pages.