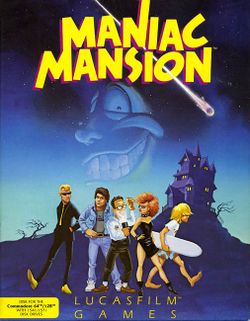 Maniac Mansion is a graphical adventure game originally released in 1987 by Lucasfilm Games (now known as LucasArts). Maniac Mansion has become known among video game players and programmers for its highly-acclaimed gameplay and its introduction of new ideas into gaming, including multiple possible endings, multiple user-selectable characters with significantly different abilities, and critical clues contained in numerous cut scenes. It was the game for which the SCUMM (Script Creation Utility for Maniac Mansion) engine was created and named after, which went on to be used by LucasArts for ten more years to create 13 original titles. It is the first game to feature Chuck the Plant (who is found in the library). Some of the characters appear in other LucasArts adventure games, notably the sequel, Day of the Tentacle.

It has been twenty years, to the day, since a mysterious purple meteor came hurtling out of the sky and made a large crater in the front lawn of a huge Victorian-era mansion belonging to the Edison family. Dr. Fred, his wife Nurse Edna, and their son Edward "Weird Ed" Edison were reclusive people who left the house very rarely, but the meteor's arrival brought about a strange change in Dr. Fred and the family were seen even less, and even their mansion has fallen into disrepair. Lately, patients from the local hospital have begun to disappear without traces.

Now, a local teenage cheerleader, Sandy Pantz, has been kidnapped. Dave Miller, her boyfriend, saw her being carried off to the Edison's mansion and has gathered a few of his college pals on a rescue mission to invade the mansion and save Sandy. The player can select the friends from a group of six, and the game plays somewhat differently depending on which friends are selected. The game is a parody of the horror B-movie genre, featuring a secret lab, disembodied tentacles, and an evil mastermind.