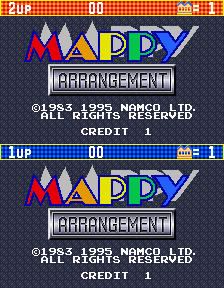 Mappy Arrangement is a platform game, released by Namco as part of the compilation arcade game Namco Classics Collection Vol. 1 in 1995; it's the fifth and last title in the company's Mappy series, as well as the second one which allows two players to play simultaneously (Player 1 controls the original Mappy at the bottom of the screen, while Player 2 controls a new, orange-suited, sunglasses-wearing Micro Police mouse named Mapiko at the top of it). Several new features have also been introduced - such as trampolines that the mice can bounce on seven times before breaking (as they'll only change colour after every second bounce), doors with knobs on both sides (and as such, can be opened both ways), levers that the mice can use for a quick lift up (or down) to the platform above (or below) them, vertically-scrolling bonus rounds (with randomly-placed Nyamco balloons), and boss rounds, in which the mice must fight an enormous robotic cat ("Mecha-Nyamco"), with rechargeable microwave doors.

In a two-player game, the stolen items both players retrieved will also be displayed next to their mice at the end of every regular round; the text "WIN" will then be displayed to the right of the mouse who retrieved the most (or, if both mice retrieved five stolen items, the higher value) items as he receives a 3000-point bonus, while the text "LOSE" is displayed to the right of the other one (and he does not receive anything). As the new bonus rounds scroll upwards, what was below the mice is also written out of the game, so if either one breaks a trampoline and goes off the bottom of the screen, he shall not get bounced back up again, unless the trampoline beneath the one that he broke is still present.