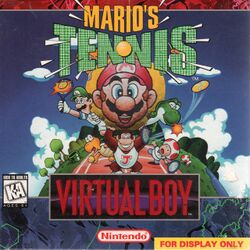 Mario's Tennis is a Virtual Boy game first released in 1995. Also known by its working title "Mario's Dream Tennis", it was the console's pack-in game in North America. The game features eight famous characters from other Nintendo video games. Although a two-player function was announced, it was not implemented since the cable required to link two Virtual Boy units was never released. Due to the Virtual Boy's poor sales in North America, Mario's Tennis did not become as popular as the other games in the Mario Tennis series.