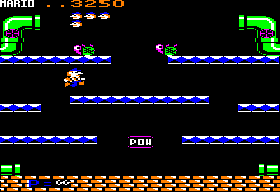 Developed by Atarisoft in 1983, but not released. A prototype version was found, hacked, and distributed.

Developed by Atari in 1983, programmed by Dan Hitchens. Although the least faithful of all of the Mario Bros. home conversions, this is a rather impressive game by Atari 2600 standards. Only two enemies are ever visible on the screen at any time, and the coins are rectangular. Other than that, many of the game's finer details (but not all) were successfully converted, including simultaneous two player play. 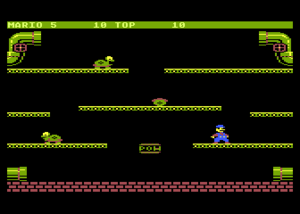 Developed by Atari in 1983, programmed by Bob Merrell. Although limited in number of colors, this version is well animated and features most, but not all, of the game details. It is unknown if this version was intended to be officially released on the Atari 8-bit line of computers or not, but an unofficially converted version was hacked and distributed for play on the computers. An official version would not be released until 1988 for the Atari XE (see below.) 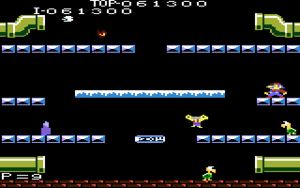 Developed by Atari in 1988. One of the most popular games released for the Atari 7800, probably due to the fascination that players had with the Nintendo franchise. Although the screen resolution is different, the sprites seem to be based on the NES or Famicom versions, which is likely intentional, as it would show the system's power and give it a small competitive boost. 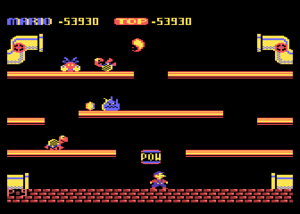 While the Atari 8-bit version developed was identical to the Atari 5200 version, when Atari released the XE version of computers, and the XE Game System, Sculptured Software was hired to reprogram the game from scratch in 1988. Using a custom built sprite engine, the final version featured an unprecedented ability to display a high number of large moving sprites in contrast to the system's typical abilities. This conversion is one of the most accurate.

In 1984, Atarisoft developed a version for the Commodore 64 for the United States, but it was never officially released. A prototype version was distributed, but it is reported to contain a number of bugs. In 1987, Ocean developed a different version for the European market.

The Famicom conversion was the sixth game released for the Famicom when it launched in 1983. At that time, the amount of memory provided on a cartridge was limited, and thus sacrifices to the gameplay were made. There are no bonus stages with invisible platforms, and no icicle formations. The sprite size and animation of several pests were simplified. Aside from these changes, the gameplay is very faithful. 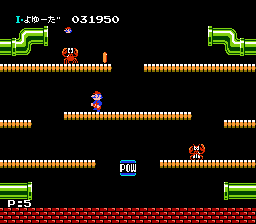 In 1988, Nintendo released an updated version of Mario Bros. for the Famicom Disk System add-on for the core Famicom system, entitled Kaettekita Mario Bros.‎. This version provided several corrections and changes that restored the original Famicom version of the game to be more arcade accurate. It also included new modes of play and enhancements which went on to be the basis for the Mario Bros. Classic game that exists on several Game Boy Advance games including all of the Super Mario Advance series of games. A simplified version of this game was released in Europe in 1993. 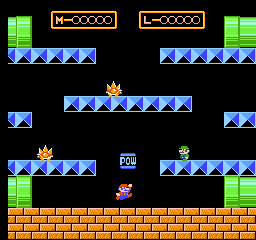 When Super Mario Bros. 3 was released for the NES and Famicom, it featured a mini-game reprisal of the original Mario Bros. In order to access it, two players had to try to occupy the same conquered square on the world map. If they did, the mini-game would start and five pests would escape from the pipes. The player who kicked off the most pests, or outsurvived the other player, was the winner and allowed to continue the main game. In this mode, one player could bump another player from underneath, causing one of the cards that the other player collected at the end of a level to leave the players inventory and bounce around the pipes. The next player who touched the card could collect it. 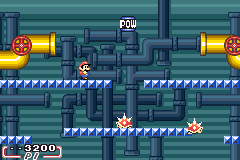 At the title screen of each of the Super Mario Advance games (as well as the Mario & Luigi: Superstar Saga,) you can select the classic version of the Mario Bros. game, which is a graphically enhanced version of the one remade for the Famicom Disk System. It features a few changes, such as an extra POW block at the top of the screen (which scrolls around) and up to four players simultaneously.