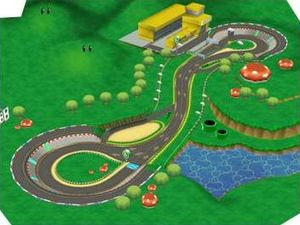 Map of the Circuit.

The first Mushroom Cup track is an introductory course to the game, which features a long straight segment interrupted by two large gradual curves. The curves offer the racer a choice of sticking to the inside or riding the outside where speed boosts lie. The only obstacle players have to deal with is a large chained Chomp that lurks in a pit next to the track, but it is generally out of reach unless the player tries to take a shortcut past it.

As its name suggests, the course is primarily Luigi-themed, with his image appearing on many of the decorations surrounding the track. The mansion Luigi receives in Luigi's Mansion becomes visible in the background. Also of note is that this course changes slightly between the 50cc and 100cc-plus versions. In the 50cc version, the straightaway is split through the center by a wall, but in the harder versions there is nothing separating the racers zipping through from opposing sides.

The environments of this course are taken from Super Mario Sunshine's Isle Delfino. The race begins in a near-straightaway in a city that looks like Delfino Plaza and inhabited by Piantas and Nokis. It then turns to carry racers past a brief segment that looks similar to Ricco Harbor. However most of the track runs across a beach with fast-moving tides and dangerous Cataquacks, an environment like that on Gelato Beach.

The beach offers racers the choice of taking an arching passage around the dangerous waters or using a ramp to jump onto an island. The beach itself rapidly shrinks and grows as the tide moves in and out throughout the race, and the water can slow down and even flood karts. Noteworthy is a hidden detour that shoots racers through a warp pipe, costing them some ground but giving them a free double item block. On a side note, Daisy's Cruiser is visible out on the ocean. 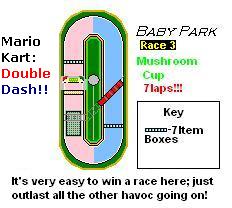 A map of Baby Park.

This track is actually a ride within an amusement park, and other attractions are visible all around. Poochy even makes a cameo appearance in the background. The course is oval shaped and very short, although the game makes up for this by recommending seven laps rather than the usual three. Despite its simple appearance the races on it can get very hectic, as racers are trapped in a small space and constantly given items.

The only environmental interference comes in the form of a roller coaster that occasionally zips by from above the track. As it does so it may catch some racers off-guard and send them spinning.

As its name suggests, this course takes place in a steaming Egyptian-style desert, with the road winding through thick sands and mysterious ruins. Players must take care to stay on the track, as the darker sand off of it will heavily slow down karts unless counteracted with a Mushroom or Star item. Going too far off the course will cause karts to stall and have to be rescued by Lakitu.

Aside from the thick sand, racers must navigate around Pokeys and a giant vortex of quicksand that draws anyone into the mouth of a hungry Piranha Plant. Worst of all is the tornado, which sucks up karts and sends them flying.