After a racer gets a gold trophy on the Mushroom, Flower, and Star cups, they are rewarded with the Special Cup. 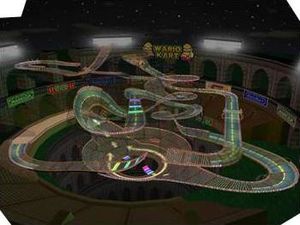 Overview of the track.

This track is the longest of all of the tracks. It takes place in Wario's colosseum with only two laps instead of three. The reason is how complex it is. It may not contain obstacles, but it has large jumps, long, difficult to navigate turns, and many, many steep drops. Towards the end, racers drive over a mud pit, where they are slow down slightly but much more if they miss the platforms on the mud. This can be avoid by using a mushroom to speed over the track. This track has the same music as Waluigi Stadium.

Shortcuts - Technically, it's longer to take the boost pad, than to drift around the corners. That's about as far as shortcuts go on this course.

Taking place in a jungle, this course has a dinosaur that can crush drivers and spin them out with its head, geysers that send them flying, and a bridged section of the track where three paths can be taken. Path number one is long but easy to drive. Path number two is attached to path number one and allows drivers to take a faster route. Path number three is the shortest but riskiest of the three paths. It has four boost pads that speed up them, but it is hard to turn, and it may result in a plummet into the water. Lakitu will then have to rescue them. This track has the same music as DK Mountain.

In addition, there is a jump shortcut that requires a mushroom when going into the cave. Using it cuts the distance of the cave in half, but if a set of drivers miss it and fall through darkness, Lakitu must come to rescue them.

Shortcuts - After the first cave, make a sharp right to a narrow bridge with a dash panel. Also, use a mushroom for a slightly longer route but an item box, on the bridge on your right at the start of the second cave.

This track is, of course, one of Bowser's Castles. Drivers must avoid Thwomps that can crush them, lava (if drivers fall in lava or fall off of the track, Lakitu must come get them) Podboos, and a giant fireball - shooting statue of Bowser himself.

Shortcuts - There's one but it's a major one. When you come to where the Bowser statue spits fire onto the track, go straight onto the black lines and then drift to the left right when you start to jump off. Hopefully you'll make a sharp turn and won't bump into the wall but it's a major time saver, either way. 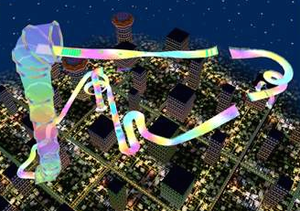 Overview of the track.

The final course in the game, it is also the hardest. It takes place above the Mushroom Kingdom on a rainbow track with rainbow images of the items. Its tight curves are hard to drive through, and there is a large pipe that launches racers across the track.

Not all of the track is barricaded, which could allow a racer to fall off the edge, causing them to be rescued by Lakitu. On occasion, stars will fall onto the track and, if hit, work the same way as a normal star.

Shortcuts - Stars sometimes drop onto the track in non-time trial modes. Watch out, though! They could be bananas.