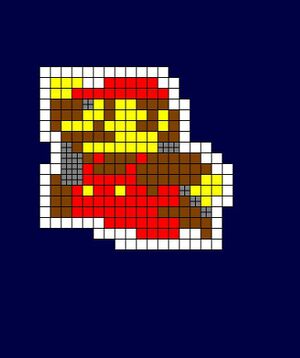 Tilt-A-Kart is a battle course shaped like the arcade version of Mario and it is one of the craziest battle course in the game. When the match begins, both players start at the middle of the arena. However, as the battle goes on, you'll notice that the ground isn't stable and the stage will tilt in all kinds of directions! This causes the plentiful item boxes to start tumbling off the side of the arena. Be careful not to fall off the giant course. If you do fall off, you begin on one of three white blocks set up above the arena. The white blocks on the border of the structure will slow you down, but you'll be an easy target for opponents.