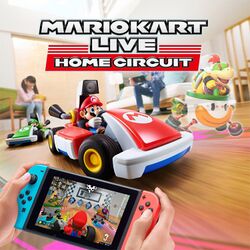 Mario Kart Live: Home Circuit is an augmented reality kart racing game for the Nintendo Switch that aims to bring Mario Kart gameplay into the real world. Players can build their own race courses in their homes by placing the included cardboard gates, and can then use their Switch systems to drive a toy kart around their courses. Two models of karts are available, one with a Mario figure and one with a Luigi figure. During races, virtual items and hazards will appear on the courses, which can be seen on the Switch's screen and which the karts respond to. Players can play a "Grand Prix" against virtual Koopaling opponents, or can play Time Trials where they try to get the fastest time. Multiple karts can be used for multiplayer races with up to four players, though each player will need their own Switch system and their own kart.