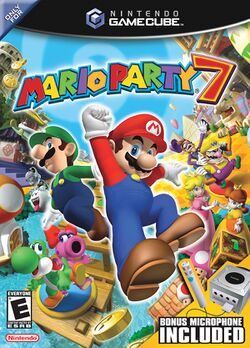 Mario Party 7 (マリオパーティ 7, Mario Pāti Sebun?) is the seventh in a series of board game style video games for Nintendo platforms and is the fourth and final title that appears on the Nintendo GameCube in the Mario Party series. Mario Party 7 features popular Nintendo characters. It was released on the Nintendo GameCube in North America on November 7, 2005, in Japan on November 10, 2005, in Europe on February 10, 2006, and in Australia on June 8, 2006. It features 58 new minigames. This game's host is Toadsworth, Princess Peach's longtime steward. It also makes use of the microphone peripheral introduced with Mario Party 6, which can be used in 10 minigames. This game also includes six entirely new worlds, with one unlockable. Mario Party 7 is followed by Mario Party 8.

From the back cover:

"A fun-filled cruise around the world has turned into a vacation nightmare! Join Mario, Luigi, and the whole gang as they try to stop Bowser from ruining their party!"