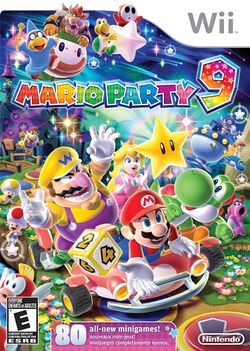 Mario Party 9 (マリオパーティ9 Mario Pāti Nain) is a party game for the Wii released in March 2012. It is the first game in the Mario Party series to be developed by Nd Cube, as they take over development of the series from Hudson Soft. Hudson Soft was namely absorbed by Konami in March 2012.

Two to four players take part in each game, composed of a virtual board, and move around a variety of themed lands to collect Mini Stars, while avoiding certain spaces. All players move around in one vehicle. The number of spaces the player moves is determined by a roll of the dice block found within the game. Minigames reappear, and have a larger focus on the gameplay than they did in the previous game. Instead of trying to collect coins to buy stars, players receive Mini Stars (bananas in DK's Jungle Ruins) if they pass by them. Players must also try to avoid Mini Ztars (Z-bananas in DK's Jungle Ruins), which deduct their current amount of Mini Stars. In this game, the minigames don't appear after everyone moves, but only when a player ends up on any of the spaces or events that triggers a minigame. A person can play on solo mode to unlock the final stage, as well as two playable characters.

Each board culminates in a boss battle that is played with all players in the vehicle. There is also a boss battle at the halfway point of a board. At the end of each stage, the number of Mini Stars (bananas in DK's Jungle Ruins) the player collects is converted into Party Points, which can be used to buy new stages, constellations, vehicles, difficulties, and sounds.