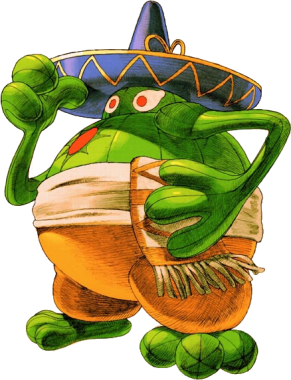 All that is known about Amingo is that he is on a search for a wind that is sweeping across his land and destroying any plant life that it happens to come into contact with.

That's it. It is rumored that he may have been an unused design for another Capcom game, possibly part of the Buster Brothers series (or Pang series as it's known in Japan), but it may be just as likely that he was specifically designed for Marvel vs. Capcom 2. Many of his attacks utilize his ability to shape shift his body into various vegetation-like forms (bulbs, vines, thorns, etc.) However, one set of attacks, the Daichi no Kodomo or Children of the Earth, allows him to summon baby cacti from little bulbs and command them to attack his opponent. Two commands instruct the cacti to punch or kick the opponent, while the third instructs them to latch on to the opponent and hold them still while Amingo continues to attack them.

His Shokubutsu no Okite Hyper Combo is more comedic than useful, sending a little vine across the screen in hopes of ensnaring the opponent. If it connects, it lobs the opponent into Amingo who shake around with his Maracas, causing a lot of damage. His other super is a straight vertical vine attack that is more useful in combos. But his most unique feature is as a partner. Depending on the partner assist type chosen for Amingo, he may drop a piece of fruit that can help you during a fight. If you choose the α-type, he will leave behind fruit that restores your current fighter's health. If you choose the β-type, the fruit he leaves behind will increase your current fighter's defense until he or she leaves or is defeated.

Amingo is probably one of the more overlooked fighters in Marvel vs. Capcom 2, simply because of his sheer silliness.