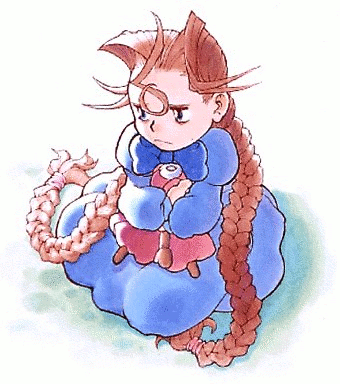 Anita's inclusion in Marvel Super Heroes, even as an especially hidden character, is something of a mystery. Anita actually originates from Capcom's Darkstalkers series. Appearing only as a support character, she is the adopted ward of Donovan Baine, a dhampir (half vampire, half human). For reasons unknown, she is either incapable of expressing any emotions, or simply chooses not to, due to the trauma of seeing her parents slaughtered at the hands of an unknown Darkstalker. She carries the body of a headless doll wherever she goes. She is rather gifted psychically, and has a rather developed telekinetic ability at such a young age. She is also capable of sensing the direction of the nearest Darkstalker, a tool which Donovan uses to seek out his next target.

How Anita ended up in Marvel Super Heroes is unknown. Capcom placed Akuma in X-Men: Children of the Atom as a hidden character. However, unlike Akuma, Anita was neither popular, nor was she ever present as a full fledged fighter in any other game. As a result, some of Anita's attacks are a little bizarre. She wields a tiny version of Donovan's living blade (known as Dhylec), and can plant it in the ground and summon it to attack just as Donovan can. Donovan has the ability to summon three different elemental spirits while Anita can only summon two. On top of that, the "spirits" that she summons are actually Akuma and Lin-Lin, the sister of Hsien-Ko from Darkstalkers.

Her single Hyper Combo is extremely over powered, and can usually kill an opponent with the block damage alone. The move is called "Love For You," and when it is performed, 99 heads spring forth out of her headless doll. This move will almost certainly end a match unless it is performed right at the very beginning of the fight. Anita has no ending, nor does she have her own portrait between fights (Thanos is shown instead.) She's simply there to be played around with as more of a humorous entry, a little girl that can beat up Marvel's greatest superheroes with her doll. However, this is not her only appearance in the Marvel vs. Capcom series. She appears once more in Marvel vs. Capcom as one of the support characters, telekinetically hurling various objects at an opponent, before running back off the screen.